A History of Domesecration ~ David Nibert

David A. Nibert – A History of Domesecration 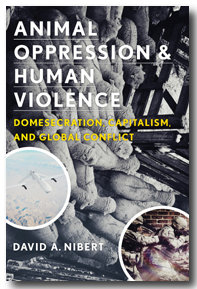 This week the Columbia University Press Blog's featured book is Animal Oppression and Human Violence, by David A. Nibert, Professor of Sociology at Wittenberg University. They featured content from the book and original posts from the author. Be sure to enter their book giveaway for a chance to win a FREE copy of Animal Oppression and Human Violence!


The following is the first half of a guest post by David A. Nibert, in which he explains how he first came to be aware of the issues he discusses in his book, and delves into the history of the phenomenon of “widespread and systemic oppression of other animals by humans.”

I never thought much about other animals or food production when I was younger. As a college sociology student in the early 1970s, I learned about racism, sexism, classism, homophobia, and other forms of oppression – but scarcely a word was mentioned about the oppression of other animals. Professors spouted the traditional prattle about the virtues of animal “domestication” and the “mutually beneficial partnership” that resulted. This perspective has remained largely unchanged for decades and reflects a statement made in 1896 by Frank Wilson Blackmar, who later would become president of the American Sociological Association.

The domestication of animals led to a great improvement in the race. It gave an increased food supply through milk and the flesh of animals. . . . One after another animals have rendered service to man. They are used for food or clothing, or to carry burdens and draw loads. The advantage of their domestication cannot be too greatly estimated.

(Note: throughout this post, words that defame or devalue humans and other animals will put in quotes, or italicized if they appear in a quote.)

Blackmar wrote this 117 years ago, when racism and sexism also were given “scientific” endorsement. While those attitudes had changed greatly by the late 20th century, views toward animals mostly had not, and I was as well indoctrinated as anyone. But in 1983 I was visiting a friend in Madison, Wisconsin and happened upon an animal rights demonstration. I was stunned when I learned about the systemic nature of the horrific treatment of other animals and astonished that, after my years of political activism and pursuit of a doctorate degree, it never occurred to me that animals also were subjected to institutionalized oppression by the billions.

In Animal Oppression and Human Violence: Domesecration, Capitalism and Global Conflict, I challenge the anachronistic view that human oppression of other animals was a boon for human societal development and argue instead that the growing level of such oppression is one of the most serious issues facing the world today.

Historically, widespread and systemic oppression of other animals by humans is a relatively recent phenomenon that began about 10,000 years ago. Humans in Eurasia began capturing and confining free-living animals, such as horses, camels, cows, pigs, goats and sheep, and using them as food (primarily for elites) and as laborers in early agricultural society. Humans also began manipulating animals biologically by controlling their reproduction to produce offspring that better served human interests

By their confinement, exploitation, cruel treatment and biological manipulation, these other animals were desecrated. However, the word widely used to refer to the treatment of animals – which is silent about their oppression and serves as a euphemism to support it – is “domestication.” Language is an important tool in naturalizing and justifying oppression and we should always seek to expose those phrases and words that serve as ideological supports for oppressive systems. It is important to reject the term “domestication,” which masks the fact that most all animals who have “rendered service to man,” in Blackmar’s words, actually were enslaved and mistreated and suffered enormous trauma. Recognizing that other animals have been harmed and desecrated by such treatment, I refer to this oppressive process as domesecration.

Growing oppression of domesecrated animals by powerful male elites, including the use of horses as instruments of warfare, made large-scale warfare possible. Sitting on the backs of horses and eating the domesecrated animals forced to accompany them allowed ferocious armies to rage over thousands of miles. Through the centuries nomadic pastoralists like Attila the Hun and Chinggis Khan and numerous rulers of autocratic empires waged brutal and deadly wars throughout Eurasia. Societies less patriarchal or warlike were trampled in the pursuit of grazing lands, fresh water sources, more domesecrated animals, people who could be enslaved or subordinated and other valuable booty to enrich potentates and finance more warfare. Millions of people not murdered outright by predatory invaders died from smallpox and similar zoonotic diseases that resulted from the crowding together of large numbers of domesecrated animals.

This pattern, ubiquitous in Eurasian history, infected the world through European colonization, and countless indigenous peoples and free-living animals perished in its wake. Their exploitation helped to create the wealth that gave rise to capitalism – a system whose foundation is steeped in the domesecration-enabled, predatory practices of the past 10,000 years.

Part 2 of this guest blog can be found HERE.

See HERE to listen to David Nibert speak about his work.

David's most recent ARZone interview in which he discusses the thesis of his new book, and more, is now available here: