Getting A Feeling For Fish: Can They Feel Pain

Getting A Feeling For Fish: Can They Feel Pain 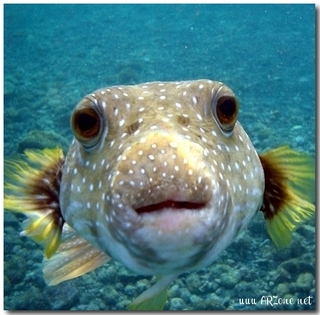 Two new scientific studies illustrate the current scientific interest in animal pain, and a stark contrast in viewpoints. On the one hand, a research team from Belfast, Ireland has shown that crabs quickly learn to avoid a once-desirable shelter after it delivers a mild electric shock. On the other, a team of seven scientists from the USA, Canada, Germany and Australia claim in a lengthy literature review that fishes are unconscious and incapable of feeling pain.

The first study, published in The Journal of Experimental Biology, used 90 shore crabs captured at a nearby beach (and released there afterwards). Each crustacean was introduced to a tank with two attractive dark shelters. Unfortunately for some of these crabs, their preferred hideout dispensed mild electric shocks. After a short reprieve in a safe tank, crabs were once again placed into the test tank with the same pair of shelters. Most crabs once again crawled under their prior favorite, only to receive another shock. However, in round three, shocked crabs usually avoided the noxious shelter, instead exploring other options. A few crabs still went to the same shelter as before, but generally scuttled away again before a shock was delivered.

This is just the latest in a series of experiments by ethologist Robert Elwood and colleagues that have thrown into question the common assumption that if you lack a backbone, you lack sentience. Earlier research has shown nuanced, pain-like responses in prawns and hermit crabs. These creatures pay more attention to a body part that has been pinched; their bodies release compounds associated with pain in vertebrates; they respond appropriately to pain-killing drugs; and they remember the source of pain.

On the flip side, a new report on fish is the latest in a series of papers led by physiologist James D. Rose of the University of Wyoming. In “Can fish really feel pain?”, published in the journal Fish and Fisheries, Rose and his co-authors argue mainly that fishes lack the nervous system sophistication to experience something as painful. All of a fish’s responses to a noxious event can be explained by the simple firing of nerve cells without any conscious experiences. In other words, fishes are automatons—unthinking, unfeeling brutes.

The crutch on which rests such bald denials of animal sentience is the privacy argument. Feelings are felt only by the one feeling them. Taken to its logical conclusion, this argument could even be used to deny feelings to humans (see: solipsism). Thankfully, nobody is laboring to advance that argument, but there are still thinkers who believe that only humans are conscious.

Several objections can be made to the case against fish pain. I’ll just mention two here. One of Rose’s chief arguments has been that fishes lack a neocortex–that familiar cauliflower-like brain structure, one of whose many functions it to assist in processing pain in mammals. Conveniently, Rose’s team doesn’t mention the fact that birds —whose minds and feelings are generally not in question—also lack a neocortex. 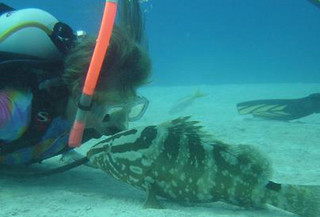 Second, Rose and company do their best to rebut a number of studies that have concluded fish feel pain, but fail to mention pain’s flip-side: pleasure. If pleasure is possible, then so is pain. How does one explain the behavior of fishes who will swim up to familiar divers to be petted by them [see photo], or as this example shows, an aquarium fish named Bob who comes to the hand to be stroked and picked up? Such behavior can be seen as actually maladaptive. For one thing, a fish could easily be caught this way, and indeed, the practice of trout tickling depends on the hapless fish’s affinity for being gently stroked on the belly. Handling may also remove some of the protective layer of mucus from a fish’s scales, making him more susceptible to parasitism or disease. I suspect that the pleasure of touch in fishes arises from the benefits of swimming in schools and currents. Many reef fish will eagerly wait their turn to be serviced by cleaner fish, whose spa-like ministrations appear to be a source of pleasure.

Little doubt that scientists will continue to debate fish sentience until the trout come home. I will continue to view fishes as my common sense and a growing number of scientific studies suggest: as thinking, feeling individuals. I prefer to think of fishes as autonomous, not automatons. So, I suspect, do the fish.

Please click this link to hear Dr. Jonathan Balcombe speak with ARZone about his incredible work with fishes and other animals:

Originally Posted at One Green Planet

You can only be conscious of your senses, and those ARE your nervous system, unless you are talking about the COMMON sense.

Dr. Balcombe spoke with ARZone about fishes, and other animals, and the work he's doing to educate humans on the emotional inner lives of fishes: