Is this right? "‘Rights,’ no, but how we treat animals matters"

‘Rights,’ no, but how we treat animals matters

Indiana legislators are considering a bill with the laudable goal of discouraging animal fighting with stiffer penalties. The get-tough approach is not for the promoters and stagers of animal fights, who already face harsh punishment. It's for those who attend such fights.

It has been a generally accepted criminal justice principle that the providers of an illegal activity should face harsher penalties than those who merely take part in the activity. But whenever the authorities want to make a point, they start cracking down on the users, too, whether they be smokers of weed who get thrown in the slammer or patrons of prostitutes who have their names made embarrassingly public.

The crackdowns are often accompanied by great debates about “victimless crimes” and whether the law should be more rehabilitative and less punitive.

The difference here is that there are victims, and their abuse creates such revulsion that there isn't likely to be any backlash against making felons out of those who just attend the fights.

Advocates for animals often go too far, talking about animal “rights” and the “ethical” treatment of animals in ways that blur distinctions between animals and humans. Such people resent the testing of mice even if it saves human lives. But it does matter – very much – how we treat animals. How cruel people are to those the most vulnerable – least able to defend themselves and to even comprehend what is happening to them or why we are doing it – is a measure of how cruel they would be toward other people if they thought they could get away with it.

And it is a measure of our decency – and our claim to civilization – when we are kind to our fellow creatures and flinch when others are not.

What do you think? Should advocates for other animals work to get laws such as these passed, or should we leave it up to others to do so? In other words, should we only advocate for veganism and animals' rights and expect that society will respond with these kinds of changes anyway? 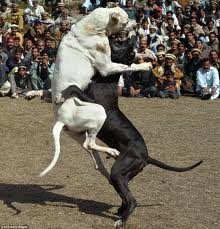 Wherever we see an injustice against other animals we should fight for their rights. Never leave anything for others to do as we have the power to act right now. If we all sat back & waited for someone else to act unimaginable horror will continue to occur to other animals & will most probably escalate while we sit idly by. We must speak up. Why would society respond with positive changes? Look where society is now

I don't think that advocating for veganism and against rights violations entails sitting back and waiting for someone else to act. I think that asking for humans to understand that their actions violate the rights of others, and that becoming vegan is a very effective way in which to end those violations and speciesism altogether, is acting in the best way we possibly can. I believe that is taking action, and doing so quite effectively.

I think we should do all we can to end dog fighting, as we should to end dolphin slaughter, kangaroo "culls" and "cock fights", but, I think that if we focus solely on dog fighting, the people who support such activities will simply move on to cock fighting, bear baiting or other equally horrific activities, without being given any reason to re-evaluate their choices and attitudes.

All single issue campaigns deserve attention, but focussing solely on those campaigns is ineffective in the fight against speciesism, in my opinion.

I see what you mean Carolyn, but unfortunately I believe that most governments and others that develop legal instruments really don't give a rats until there is sufficient public unrest that they need to do something.  This is evident by how long it takes for politicians to do something about cruelty to animals, where if it was a human involved would have immediate consequences.  Politicians put animal rights and welfare way down the list of priorities, taking the 'pragmatic' approach.  Interpret this as meaning as long as i doesn't interfere with business. So, I think that what we do need to do is support this type of thing to build a case load for the purpose of legal precedent.  At the moment there is this bizarre situation where if an individual is cruel to an animal they can suffer a significant fine and/or prison, but farmers who do this routinely are protected in law. It will really only be by exposing these issues that community perceptions will slowly change.  I have to admit I really have very little faith in the human race these days.  So, while I'd love to see widespread action, I think it will be a one-by-one basis that will hopefully gain momentum.

Personally I wouldn't oppose the proposed law, but I wouldn't actively fight for it either because many other aspects of animal advocacy feel more urgent to me. It might be helpful to write in and thank the writer for covering an issue that affects other animals, but at the same time take issue with the speciesism of the seventh paragraph and explain why that paragraph perpetuates an objectionable prejudice.