Temple Grandin, the Colorado State University professor and world-renowned animal scientist and autism advocate, was inducted into the Colorado Women’s Hall of Fame on March 8th, 2012.

She’s worked at CSU’s College of Agricultural Sciences for the past 22 years and is well-known for her work on animal behavior. She’s used her insights into the minds and perceptions of animals to develop more humane livestock handling systems. Dr. Grandin has also worked as a consultant, helping the livestock industry develop more rigorous animal care standards.

Vegetarians, vegans and critics of modern agricultural practice may not admire her for this aspect of her work, but I think it’s safe to say that any improvement in conditions for farm animals is better than the alternative, no matter what one thinks of the livestock industry.

Grandin has also written hundreds of industry publications and seven books – five of them on autism and Asperger’s. As both a woman and a person with autism, Grandin faced discrimination early in her career, but she’s turned what others might deem disadvantages into some very powerful stepping stones.

Ruby Mayeda, Chair of the Colorado Women’s Hall of Fame, explained to KUNC, a local NPR affiliate, “She had to overcome a lot of bias. And she literally had to sneak on to feedlots and other locations where females were banned to complete her research when she was going to school. And now today many of students are women so she is a recognized trailblazer in the industry for women.”

Dr. Grandin has been named one of TIME magazine’s 100 Most Influential People in the World and was the subject of a biographical movie by HBO in 2010. Regardless of what one thinks of her work with animals, she’s done a great deal to raise awareness and understanding about autism, and her ability to persevere in the face of intense gender discrimination should be recognized. 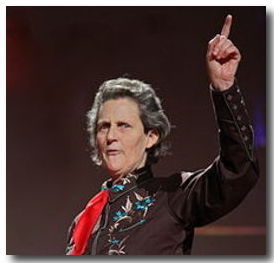 "Dr. Grandin has been named one of TIME magazine’s 100 Most Influential People in the World"  ~  this is quite frightening, in my opinion!