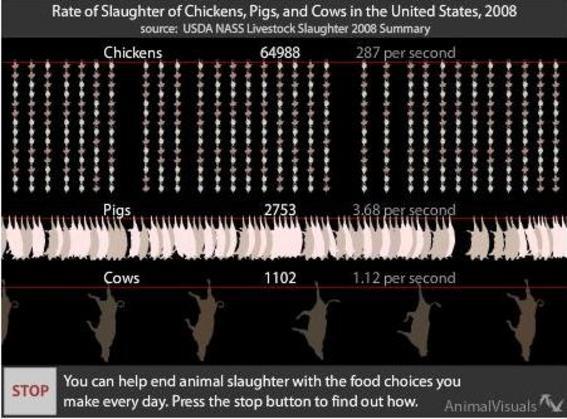 As shocking as these numbers seem, they are only the tip of the…

Hey my fellow vegans~! Some of the recent discussions here and elsewhere (in part) have been inspiration for a project that would give a face to vegans and veganism.

“I don’t base my advocacy messages on what i at heart believe.I base them on what methods and messages – based on the research, and my own experience to some extent – will create the most behavior change and thus help the most animals.” ~ Nick Cooney

When I first heard that Sea Shepherd’s…

A recent New York Times oped was brought to my attention by a long standing friend and colleague. She situated it within the context of the debate surrounding the …

When I was in Cartersville, Georgia, I met a man who was of the most despicable sort. I asked him if he had seen The Cove movie and his reply was, “Yes and it was stupid.” He hated those of us who love animals and said that our focus should be on helping…

Something struck me after hearing this first part of the interview. This may seem like an attempt at a "gotcha", and I am playing devil's advocate a bit, but I thought I would put it out as something to discuss.

In the animal shelter world in…

The VegNews Animal Testing Legislation Controversy: A Response to the Response

Whether you’re a vegan, vegetarian, animal-rights activist, or combination thereof, you got there because you asked questions. You questioned yourself about why you loved some animals and ate others, and you questioned others about why humankind uses animals for clothing, for medical testing, or for entertainment. Questioning the status quo is exactly why many of us are the people we are today—and we should never let that quality go, especially questioning those who would hold a place of…

This is an interesting article. It's too long to post the whole thing here, so I'll just excerpt a couple of bits, but I encourage everyone to read the whole thing.

Bon Appétit Management Co., which services Penn's dining facilities, has noticed an upswing in the number of students who say that they are vegetarian or vegan, said Terri Brownlee, the regional…

Human beings generally pride themselves on their ability to think. We often give this as the primary characteristic that separates us from the rest of the animal kingdom. Humans are rational, the story goes, and no other animals are. Because of this, we see ourselves as entitled to rule the Earth, as we see fit, either as benevolent stewards or as the highest beings on the Great Chain of Beings. Humans are on top of the world and all other animals are beneath us. But it’s not so…
Continue

Clarifications on “What Is Speciesism?”

In a recent post, Paul Hansen has presented several objections to the account of speciesism I present in my paper “What Is Speciesism?” (which can be found in the Journal of Agricultural and Environmental Ethics, 23 (3), 243-266 and …

Save a Elephant and look pretty.

The Happy Herbivore Elephant Necklace. Proceeds go to the Elephant Sanctuary in a Tennessee. Goal is 3500 by 9/1 This is a fashion project in new york, ny by Lindsay Shay Nixon the author of the cookbook The Happy Herbivore. Donate. It's $35 that's less than a tank of gas. Go to kickstarter or TheHappyHerbivore.com.

Hello my name is Kristina and im against animal cruelty. Im still new and I confess im in the process of eliminating and switching to non animal tested products in my house. Im currently down to my dish soup and cloths. If anyone has any suggestions im open. Im also trying to switch to vegan cutting out milk cheese and eggs. Eggs I mostly cook with. I feel very passionate about this. I dont know how people can watch videos putting the truth out there and ignore it. My cat we adopted was seized… Continue

Many of us are concerned with the animal testing status of our cosmetics and skin care products. Websites like Leaping Bunny have devoted their entire existence to ensuring the public has easy access to cosmetic companies that no longer test their products at any stage of development.  How would you feel if this were no longer an option?  There is currently legislation that could eliminate your choice for… Continue 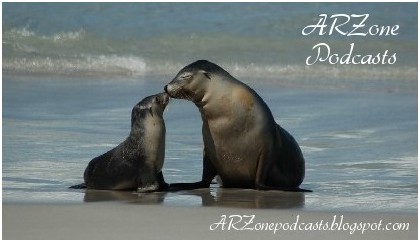 This time the ARZone team explore the ideology of speciesism and The Big C - Capitalism. Using themes from Professor David Nibert's "entanglements thesis," should we understand speciesism as rather more than simply a…

Response to Oscar Horta’s Paper (“What Is Speciesism?”)

Thanks again, Kate, for the link to Oscar Horta’s paper, which I am very glad to have gotten. To avoid wasting space or being too tangential, I am responding to it here, rather than as part of the David Nibert dialogue.

Professor Horta does a good job in laying out the philosophical options, and, in fact, ratifies my own point when he writes: “The term ‘anthropocentrism’ should be clearly distinguishable from ‘speciesism.’ These two words are not synonyms.” (p.…

My Birthday Wish | The Cove

I’ve come a long way in the last year after first viewing The Cove movie. It has launched me on a mission

wherein I shall not back down or relent. I don’t get paid a single cent to do what I do. I do it simply because it is the right thing to do. I do it because I want my children to forever know that I did all that I could. The atrocities in…

This month, a humane group announced a proposal to adjust the confinement standards for some chickens – specifically, egg-laying hens. …