5 Questions on the Footprint of Food, Veganism and the Paris Climate Talks

Vegan activist and author of three books, Mark Hawthorne, recently chatted with The Huffington Post's Tim Ward about the role of animal agriculture in climate change, and whether or not addressing our food choices and who we eat, can help save our planet.

PARIS - Mark Hawthorne is a vegan activist and the author of three books on animal rights, including the forthcoming A Vegan Ethic. In the run up to the Paris climate summit, I interviewed Mark about the role of animal agriculture in Climate Change, and whether or not changing our diet could help save the planet.

Question: I've heard that the meat, dairy, and other animal product industries are responsible for a large proportion of greenhouse gases. What are the most accurate numbers?

Answer: There have been a number of major studies in recent years, and the data differs. A 2006 report from the United Nations is the most frequently cited, and it identified the production of animal-based foods as being responsible for 18 percent of greenhouse gas (GHG) emissions--more than all of the carbon dioxide spewed by automobiles, boats, planes, and trains in the world combined. According to the study, GHG emissions from animal agriculture are in the form of methane, which has 86 times more climate change potential than carbon dioxide, and nitrous oxide, which has 268 times more climate change potential.

Then a 2009 report from the Worldwatch Institute declared that when the entire life cycle and supply chain of the industry is taken into consideration, the annual GHG emissions animal agriculture is responsible for is actually 51 percent. This report's authors recommend people consume plant-based foods instead of meat, eggs, and dairy products.

This year, the UN released another report, "Assessing the Environmental Impacts of Consumption and Production," in which they also urge "a substantial worldwide diet change, away from animal products" as a way to help curb climate change.

Question: Given this reality, how are vegans making the case for reducing the impact of consuming meat and animal products, specifically at the Climate talks in Paris?

Answer: Vegans, as you can imagine, have long been advocating a plant-based diet as a way to help the planet, and the UN conference on climate change in Paris is a great opportunity to promote the environmental benefits of veganism.

There are a number of active campaigns in France right now. There have been screenings of the documentary Cowspiracy for a couple of months, for instance, and the groupL21 Ethique et Animale is sponsoring an anti-meat poster on the Paris Metro. The poster's headline reads, "How do you prefer the planet--blue or bloody?" Also, just in time for the climate talks, the Vegan Society has released a report called "Grow Green" that details why farmers should transition from animal-based farming to plant protein agriculture; the report is being distributed to policymakers and others who can make a difference.

Question: Are there "easy wins" from a vegan point of view -- animal-based diet practices that could be most easily curtailed for the biggest reductions in GHGs?

Answer: In 2014, the journal Climate Change published an insightful study comparing the carbon footprints of meat-eaters, vegetarians, and vegans. They found that, on average, high meat eaters (those consuming more than 100 grams per day, which defines most adults in the U.S.) produce 16 pounds or 7.26 kilograms of carbon dioxide pollution per day; low meat-eaters (less than 50 grams per day) produce 10.3 or 4.67 kilograms; vegetarians account for 8.5 pounds or 3.85 kilograms, and vegans are responsible for just 6.5 pounds or 2.94 kilograms per day. So clearly, switching to a vegan diet has an enormous potential to impact climate change.

Question: Paris is famous for its rich meat-and-cheese diet. Could the inhabitants of such a city ever go vegan?

Answer: Absolutely. Parisians love good food, period. True, there's a "tradition" of eating animals, but that's habit, and habit can be changed. Change comes as people realize they can have delicious, satisfying food that does not contain meat, eggs, or dairy. It's the texture and seasonings people enjoy, not the animal ingredients. Ridding yourself of old habits and embracing a vegan diet means learning to cook with fresh, plant-based foods and gradually crowding meat off your plate in favor of veggies, grains, legumes, fruits, and nuts. For those who crave meat and cheese, there are myriad plant-based meats and cheeses that are incredibly good. Seriously. They've come a long way in just the past couple of years.

Moreover, vegan restaurants are becoming more and more popular in the city, and one need only dine at Saveurs Veget'Halles, My Kitch'n, or Gentle Gourmet Café (to name just a few of my favorites) to experience wonderful vegan fare in Paris. I highly recommend Vegetarian Paris by Aurelia d'Andrea for many more dining suggestions.

Question: What advice can you give to individuals seeking to reduce their personal carbon footprint who are not familiar with and don't feel ready for a fully vegan lifestyle? 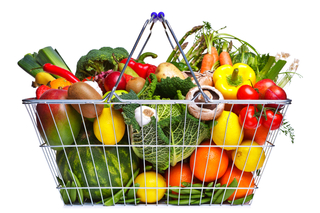 Answer: Well, first of all remember that there is nothing more natural than a vegan diet. It's the foundation for nutrition around the world--from beans and rice to soy and veggies. So it's not some strange lifestyle to be regarded with anxiety. To transition to a vegan diet, make small changes. Gradually replace animal-based foods in your meals with plant-based foods. Some foods, like cow's milk and ice cream, are easily replaced with alternatives such as soy, rice, or nut milk. Substitute meat at meal times with vegetables, legumes, and grains high in protein, such as kale, broccoli, spinach, potatoes, baked beans, lentils, rice, and quinoa. If you're really craving the taste of meat, try one of the many commercial analogues, like veggie meatballs or something from Tofurky or Field Roast. These so-called "mock meats" generally contain a lot of sodium, but they are delicious and satisfying for an occasional meal. And rather than reaching for a candy bar laced with milk or whey, grab an apple or an orange, which will fill you up without giving you a sugar crash an hour later. Soon you will have crowded animals right out of your diet.

The idea is to fill up on healthier choices first so that by the time you've given your body essential nutrients from veggies, legumes, and fruits, you'll have no appetite for unhealthy foods. As you taper off the animal-based foods and eat more of the healthy vegan foods, you'll feel satisfied and find yourself craving the unhealthy foods less and less. The variety of foods in your diet should actually expand rather than contract. Mark Hawthorne is a vegan activist and the author of Striking at the Roots: A Practical Guide to Animal Activism, Bleating Hearts: The Hidden World of Animal Suffering, and the forthcoming A Vegan Ethic (Changemakers Books, 2016). You can follow him on Twitter.

Tim Ward is the author of The Master Communicator's Handbook.

This Blogger's Books and Other Items from...

Indestructible You: Building a Self that Can't be Broken
by Shai Tubali, Tim Ward

This interview was originally published on The Huffington Post Australia Blog