Chipping Away at Injustices ~ lauren Ornelas

Chipping Away at Injustices I consider myself a fan of sci-fi, but I also consider myself a Trekkie, though I don’t know the name of the grain that kills the Tribbles, and I am really more of a fan of the original and Deep Space Nine. Real fan or not, I do like to watch it. Those of us who like sci-fi know that one of the beauties about it is how cleverly writers can weave in commentary about things such as racism, animal exploitation, sexism, etc. – setting these issues in another time and place while making them relevant to the here and now.

My husband and I have been watching all of the Twilight Zone episodes, and one struck me that I can’t shake. The episode is called “He’s Alive,” and the description from IMDB is this, “Around 1960, a tiny neo-Nazi organization struggles pathetically to succeed in a big city. A mysterious figure begins to ruthlessly guide a young, insecure U.S. Nazi leader, and the group begins to draw more attention.”

An old man who survived WWII is speaking to a bartender across the street.

The bartender says, “Used to be people would laugh at him, and lately he gets the crowd and not many people laugh either.”

The old man says, “I’ve seen it before. I have seen it all before.”

Bartender: “That was another time, another place, another kind of people that doesn’t go here.”

The old man: “That is what we said, too. They were brown scum, temporary insanity, part of the passing scene too monstrous to be real, so we ignored them or laughed at them because we couldn’t believe there were enough insane people to walk along side of them. [Sigh]… and then one morning the country woke up from an uneasy sleep and there was no more laughter. … But not again. It must not happen again. I can’t let it. We simply can’t let it happen again. All that nightmare. Oh, no. No, not this time.”

I guess it had me thinking about how people treat various forms of discrimination from racism, homophobia, cruelty to animals and the treatment of immigrants. You have those who speak hate and vitriol, those who listen and are uncomfortable with it but laugh as they do not know what to say, those who agree and those who speak against it.

I often think many of us are put into these situations, mostly with people we don’t know well or work with. 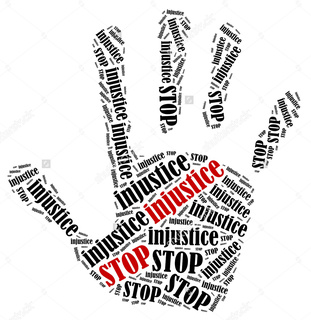 I was faced with this when my husband and I chose to protest Prop 8 in California (Prop 8 made marriage equality illegal) by having our wedding in Massachusetts, which has legalized marriage equality. I was asked, and continue to be asked, why we married out of state. People want to know if it is because we had family there or if we met there.
Every time someone asked, I knew this was an opportunity. An opportunity to make a statement against hatred and discrimination. I told the truth and said it in a way that would assume that any decent person who does not believe in discrimination would agree with me and understand why we had to make this choice. Did everyone agree with us and embrace what I had to say? Certainly not. Should I worry about offending people whose point of view is different? To me, that would be no different than being silent and not speaking up about other forms of discrimination.

And that is a small way in which we all can use our voice. It doesn’t mean we have to scream (although clearly there are times when this is necessary), but we must not be silent. We must not laugh or ignore the hatred that is being spouted these days. We should not listen to these shock jocks and laugh. We should not give them anything.

Why should those with the most constant and loudest voices be those who speak such absolute disgust? Even if we don’t have the microphones they do, we must use our voices because collectively we can be loud.

I remember when I started Food Empowerment Project and explained to fellow animal rights activists about some of our goals. I was told that racism isn’t that bad. Well, I don’t think that anyone can deny now the blatant racist comments and actions that are taking place across the country. The time is up for us to ignore it; we must constantly use our voices to speak out against it.

Now most people who are reading this (if you have continued to read) are not ones who would remain silent when animal cruelty is involved. However, I start to worry that this trend is creeping into our movement in an insidious way. Every time someone talks about “humane” meat or cage-free eggs, it is as if the discussion of the reality of the actual suffering, cruelty and deaths of these animals is erased, because the conversation, for the most part, stops there.

Why is it that those who bring up these injustices are seen as not allowing others to have a good time? Why are not those who make homophobic, racist or sexist jokes seen as the killjoys?

These conversations, as uncomfortable as they might be, must see the light of day and not be overshadowed by laughter or the thought that it will all go away if we don’t talk about it.

I don’t want to have to worry that my group will lose support because a racist or a homophobe reads this. Enough. We must take stands against those who seek to oppress people, even if they support animal issues.

We must use our collective voices to speak out against all forms of injustice if we think we can ever chip away at it.

And below is the end of that episode from the wise and talented Mr. Rod Serling:

Where will he go next, this phantom from another time, this resurrected ghost of a previous nightmare (Adolph Hitler) - Chicago; Los Angeles; Miami, Florida; Vincennes, Indiana; Syracuse, New York? Anyplace, everyplace, where there's hate, where there's prejudice, where there's bigotry.  He's Alive.  He's alive so long as these evils exist. Remember that when he comes to your town. Remember it when you hear his voice speaking out through others. Remember it when you hear a name called, a minority attacked, any blind, unreasoning assault on a people or any human being.  He's alive because through these things we keep him alive.

lauren Ornelas is the founder/director of Food Empowerment Project (F.E.P.), a vegan food justice nonprofit seeking to create a more just world by helping consumers recognize the power of their food choices. F.E.P. works in solidarity with farm workers, advocates for chocolate not sourced from the worst forms of child labor, and focuses on access to healthy foods in communities of color and low-income communities. While lauren was the director of Viva!USA, she investigated factory farms and ran consumer campaigns. In cooperation with activists across the country, she persuaded Trader Joe’s to stop selling all duck meat and was the spark that got the founder of Whole Foods Market to become a vegan. She also helped halt the construction of an industrial dairy operation in California.  She served as campaign director with the Silicon Valley Toxics Coalition for six years. Watch her TEDx talk on The Power of Our Food Choices. Learn more about F.E.P.’s work at www.foodispower.org and www.veganmexicanfood.com.

This article was originally posted on the Food Empowerment Project blog, Appetite for Justice, which can be found HERE