Do Dogs Really Feel Pain and Are They Really Conscious? ~ Yes, and Yes!

Of course, we all know that dogs, and almost all other individuals feel pain and are aware that they are themselves the ones who are in pain. Does the relative closeness to humans of other animals - whether or not another animal is more "human-like" -  determine how much respect we give other animals?

Do Dogs Really Feel Pain and Are They Really Conscious? 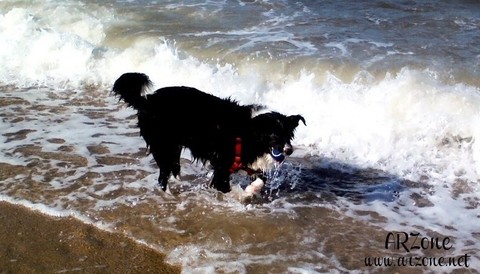 The answers to the questions "Do dogs really feel pain and are they really conscious?" - yes and yes - are so obvious it seems ridiculous even to ask them given what we know about animal cognition and sentience. Nonetheless, they do arise and not only in philosophical circles where wide-ranging discussions often take place but also among a very few skeptical researchers. New York University philosopher Dale Jamieson and I wrote about the idea of nonconscious pain 20 years ago and refuted Peter Carruthers' assumption that "in the case of brutes: since their pains are nonconscious (as are all their mental states), they ought not to be allowed to get in the way of any morally-serious objective." Just a few weeks ago I was told that these sorts of discussions are still going on.

Empirical researchers also get into the fray. Following up on what I call Dawkins' Dangerous Idea (see also), Marian Dawkins wrote, " ... from a scientific view, we understand so little about animal consciousness (and indeed our own consciousness) that to make the claim that we do understand it, and that we now know which animals experience emotions, may not be the best way to make the case for animal welfare." Indeed, it's a small leap to claim that we also should question whether human animals experience emotions.

That dogs and other animals (including fish, see also) really do feel pain and really are conscious beings is assumed in veterinary medicine, human-oriented biomedical research, the establishment of guidelines for such research, research on animal cognition, emotions, and moral sentiments, and animal training. It's not a matter of if these traits have evolved and are shared by other animals, but why.

Two quotations from a recent essay about personhood in dolphins support what I just wrote above and what the majority of researchers believe based on available empirical:

Despite not being able to locate the seat of consciousness in the animal brain—something true for humans as well—most scientists no longer ask whether animals have inner experiences. Some degree of sentience is considered self-evident. For neuroscientist Jaak Panksepp, one of the world’s leading experts on the neural origins of mind and emotion, “the denial of consciousness in animals is as improbable as the pre-scientific anthropocentric view that the sun revolves around the Earth.”

In a sense the human-to-animal mind question may simply be an exaggerated version of the human-to-human mind question: We can never entirely know another person’s experience—all the more so if that person was raised in a different culture—but there are vast areas of overlap that can, with science and empathy and imagination, be expanded.

At a few recent meetings after I spoke about animal consciousness, self-awareness, and emotions we had wide-ranging discussions about whether animals know who they are and is their level of self-awareness the same as ours. I've discussed these topics elsewhere (see also) and suggested that it really doesn't matter if their consciousness is like ours and that while other animals may or may not know who they are and may or may not have a sense of what I call I-ness, they do have a sense of body-ness and mine-ness. Much more research on the question of I-ness is needed because we really don't know much especially for wild animals. It's time to get out of the armchair and into the field. Speculation doesn't substitute for careful studies of behavior.

I concluded my earlier article as such: In my book, Minding animals: Awareness, Emotions, and Heart and elsewhere I argued that a sense of body-ness is necessary and sufficient for most animals to engage in social activities that are needed in the social milieus in which they live. But, while a sense of body-ness is necessary for humans to get along in many of the situations they encounter, it's often not sufficient for them to function as they need to. A human typically knows who he or she is, say by name, and knows that "this body" is his, Marc's, or him, Marc. There's a sense of "I-ness" that's an extension of "body-ness" or "mine-ness." So, my take on animal selves means that David Graybeard [a chimpanzee who Jane Goodall studied for years and was the first chimpanzee observed using a tool] and Jethro [my companion dog with whom I shared my home for years] knew they weren't one of their buddies. Many animals know such facts as "this is my tail," "this is my territory," "this is my bone or my piece of elk," "this is my mate," and "this is my urine." Their sense of "mine-ness" or "body-ness" is their sense of "self."

At many gatherings discussions of animal pain and animal emotions often follow talk about animal consciousness. And, when I ask if people believe that dogs, for example, feel pain, as far as I can see every head goes up. But then someone often asks, "Do they know they are in pain?"

Once again, I'm happy to have my philosopher colleagues debate the notion of nonconscious pain (and other experiences) and whether an animal knows that she/he is in pain, but from a practical point of view that underlies so much of what we do to make sure animals don't suffer we all assume that they do feel pain. So, while there are "academic" questions about animal self-awareness, there also are some very important practical reasons to learn about animal selves. Achieving reliable answers to questions about animal selves is very important because they're often used to defend the sorts of treatment to which individuals can be ethically subjected. However, even if an animal doesn't know "who" she is, this doesn't mean she can't feel that something painful is happening to her body. Self-awareness may not be a reliable test for an objective assessment of well-being.

So, when, for example, my companion dog Jethro limped over to me after tripping on a rock, squealing and holding his left front leg in the air and asking for me to take care of him, it really didn't matter if he had a deep sense of self. He really felt the pain, I'd venture to say his pain, and when I took him to the veterinarian she confirmed that he had a badly torn muscle and was indeed in pain. Some pain-killers and rest really did the trick, the same as they would for a human animal.

Whether or not nonhuman pain or consciousness is just like ours isn't the important issue. Speciesists often use taxonomic or behavioral (cognitive, emotional) closeness to humans, similar appearance, or the possession of various cognitive capacities displayed by normal adult humans to draw a line that separates humans from other animals. The Oxford English Dictionary defines speciesism as "discrimination against or exploitation of certain animal species by human beings, based on an assumption of mankind’s superiority."

Marc Bekoff, Ph.D., is a former Professor of Ecology and Evolutionary Biology at the University of Colorado, Boulder, and co-founder with Jane Goodall of Ethologists for the Ethical Treatment of Animals. He has won many awards for his scientific research including the Exemplar Award from the Animal Behavior Society and a Guggenheim Fellowship. Marc has written more than 200 articles, numerous books, and has edited three encyclopedias. His books include theEncyclopedia of Animal Rights and Animal Welfare, The Ten Trusts (with Jane Goodall), the Encyclopedia of Animal Behavior, the Encyclopedia of Human-Animal Relationships, Minding Animals, Animal Passions and Beastly Virtues: Reflections on Redecorating Nature, The Emotional Lives of Animals, Animals Matter, Animals at Play: Rules of the Game (a children's book), Wild Justice: The Moral Lives of Animals (with Jessica Pierce), and The Animal Manifesto: Six Reasons For Increasing Our Compassion Footprint. In 2005 Marc was presented with The Bank One Faculty Community Service Award for the work he has done with children, senior citizens, and prisoners. In 2009 he was presented with the St. Francis of Assisi Award by the New Zealand SPCA. His homepage is marcbekoff.com and with Jane Goodall http://www.ethologicalethics.org/. Twitter @MarcBekoff