Leave No Dolphin Behind: Dolphin Pod Carries Injured Member Until She Stops Breathing

This video shows a pod of dolphins trying to save their companion. It's quite sad, but I think it shows a small insight into the complex social behaviour, and emotional inner lives of dolphins, and other animals. Some humans still seem to find it surprising that dolphins display such behaviours. Hopefully more footage like this may help to show these situations aren't as rare as may be thought.

In 2008, researchers tracking a pod of around 400 dolphins, says New Scientist, spotted one who looked really hurt: Apparently she was wriggling and tipping from side to side, sometimes turning upside-down. Her pectoral flippers seemed to be paralysed. The female dolphin, seen in the video above, was having a lot of trouble swimming and kept flipping upside down or sinking into the water.

Coming to her rescue were a dozen other dolphins.

The other dolphins crowded around her, often diving beneath her and supporting her from below. After about 30 minutes, the dolphins formed into an impromptu raft: they swam side by side with the injured female on their backs. By keeping the injured female above water, they may have helped her to breathe, avoiding drowning.

Alas, the pod’s efforts to save their ailing friend could stave off the inevitable no longer. The female dolphin, say the researchers, eventually just stopped breathing. Five dolphins stayed with her and continued touching her body, until she sank out of sight.

According to New Scientist, some researchers think that dolphins are capable of mourning and of understanding the pain that another dolphin is going through. 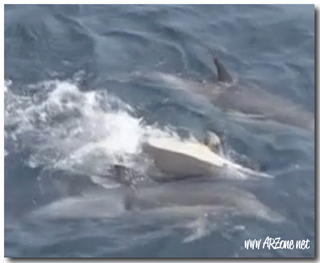