MIDWAY: A Film by Chris Jordan 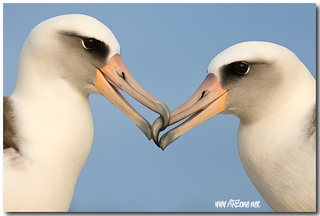 Midway Atoll, thousands of miles from the nearest coastline, is a critical habitat in the central Pacific Ocean. A number of native species rely on the island which is now home to almost 70% of the world's Laysan Albatross population, and 40% of the global Black-footed Albatross.

Midway supports nearly three million birds, including seventeen different species of seabird, the rarest of which is the Short-tailed Albatross, otherwise known as the “Golden Gooney.” Over 250 different species of marine life are also found in the 300,000 acres (120,000 ha) of lagoon and surrounding waters.

MIDWAY : trailer : a film by Chris Jordan from Midway 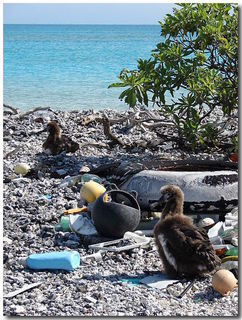 Unfortunately, Midway Atoll, in common with all the Hawaiian Islands, receives substantial amounts of marine debris from the Great Pacific Garbage Patch. Consisting of ninety percent plastic, this debris accumulates on the beaches of Midway in unbelievable amounts every year. This garbage represents a hazard to the bird population of the island. Of the 1.5 million Laysan Albatrosses that inhabit Midway, nearly all are found to have plastic in their digestive system, with approximately one-third of all chicks being killed by this plastic. There's no way of telling the devastation to the marine life of this area.

This film, and the work of the MIDWAY media project is a powerful journey into the heart of one of the most devastating, and avoidable environmental tragedies of our time.

On one of the remotest islands on our planet, tens of thousands of baby albatrosses lie dead on the ground, their bodies filled with plastic from the Pacific Garbage Patch. Returning to the island over several years, the MIDWAY team is witnessing the cycles of life and death of these birds as a multi-layered metaphor for our times. With photographer Chris Jordan as guide, they walk through the fire of horror and grief, facing the immensity of this tragedy—and our own complicity—head on. And in this process, they find an unexpected route to a transformational experience of beauty, acceptance, and understanding.

They frame their story in the vividly gorgeous language of state-of-the-art high-definition digital cinematography, surrounded by millions of live birds in one of the world’s most beautiful natural sanctuaries. The viewer will experience stunning juxtapositions of beauty and horror, destruction and renewal, grief and joy, birth and death, coming out the other side with their heart broken open and their worldview shifted. Stepping outside the stylistic templates of traditional environmental or documentary films, MIDWAY will take viewers on a guided tour into the depths of their own spirits, delivering a profound message of reverence and love that is already reaching an audience of tens of millions of people around the world.

Production of the feature film "MIDWAY" continues through 2013.