We've all lost a kind and caring friend, Norm Phelps. Paul Shapiro shares the news of Norm's passing, and some of his thoughts on Norm's life and work: 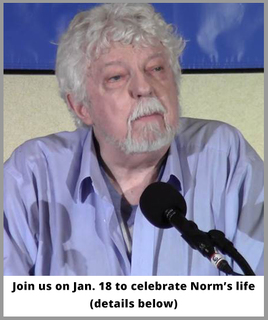 It's with sadness that I report Norm Phelps is no longer with us. Many know Norm from his impactful writings about animal protection, and many others knew him as a humble, kind-hearted friend. Here are some of my thoughts on Norm's life, along with an announcement about the upcoming celebration of that life at the Compassion Over Killing office.

It’s with a heavy heart that I report that one of the best friends animals have had, Norm Phelps, has passed away at the age of 75. He died in Meritus Health Hospital in Hagerstown, Md. on December 31, 2014. Norm is survived by his loving, devoted wife and fellow animal advocate Patti Rogers, along with their beloved cats.

Many in the animal protection movement knew Norm as a thoughtful, pragmatic advocate and the author of three influential books, including The Longest Struggle: Animal Advocacy from Pythagoras to PETA, as well as two important books on major religions and their views on animals. A list of his books and essays is available on his Web site.

Norm was a founding member of the Society of Ethical and Religious Vegetarians and served during his retirement as volunteer outreach director for The Fund for Animals.

I first met Norm when he began volunteering for Compassion Over Killing in the mid-1990s, and then I was honored to become his coworker in 1998 at The Fund for Animals. He acted as a mentor to both young and old in the office, and he exhibited such a deep empathy that when a member would call to express their despondence at some horror that was afflicting animals, they would always be transferred to Norm so that he could comfort them. Norm was widely beloved by those who knew him, and even those who may have occasionally disagreed with Norm respected him tremendously for his integrity and intelligence.

For decades Norm was a fixture at major animal protection events: the Hegins pigeon shoot in Pennsylvania, conferences at which he spoke about the history of the animal protection movement and faith-based issues, vigils, leafleting events, and more. While the first part of his life was spent, as he used to joke, as a government bureaucrat at the Department of Transportation, the latter portion was devoted to creating a kinder world for animals. You can read about Norm’s transformation on his web site. He even retired early from the federal government so he could devote more years of his life to full-time animal advocacy.

The final years of Norm’s life were lived at the mercy of an illness that prevented him from engaging in much physical movement. However, this challenge led Norm to devote himself to his writings on behalf of animals. Were it not for the selfless and loving care of Patti, who provided for Norm with great devotion during this cruel chapter of his life, many of his essays and books that contributed so substantially to the animal protection literature would have never been written.

There’s no shortage of positive adjectives one could use to describe Norm: gentle, erudite, compassionate, empathic, and dedicated all come to mind. But perhaps humble is the word that’s most fitting for him. Norm was always giving credit to others, regularly open to the possibility that he could be wrong, and constantly seeking to shine a spotlight on what others were doing to give animals a voice. It’s in that spirit that he dedicated The Longest Struggle “to the unknown animal activist.” Norm wrote of them:

“They do not seek recognition, and certainly not money—often they donate themselves into perpetual poverty. They seek only to relieve the suffering of the weakest, the most defenseless of those who live at the mercy of our merciless societies. They are the pride and hope of the human race.”

Norm requested that he not have a funeral, but that people remember him by more fully devoting themselves to the work of ending our species’ domination of the rest of the animals on the planet. Per the request of Patti, if animal advocates would like to make a donation in Norm’s memory, they can do so by contributing to Compassion Over Killing.

I’m honored to have called Norm a friend and colleague, and very much hope he’s resting in peace.

Originally posted at Compassion Over Killing, where you can find more information about the celebration of Norm's life, and reposted here with the kind permission of Paul Shapiro.

Paul Shapiro is the founder of Compassion Over Killing and vice president of farm animal protection at The Humane Society of the United States.