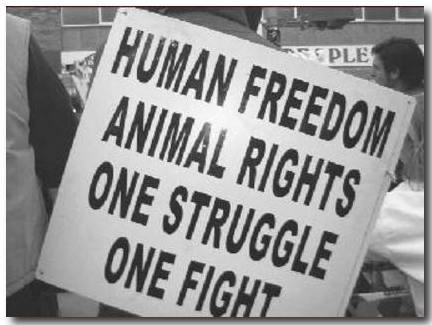 I’ve seen numerous discussions in recent months about the question – “is palm oil vegan?” This raises the issue of what makes anything “vegan.” “Is it vegan?” is a common enough question within the animal rights community.

What, however, is being asked when the question asked is, “is it vegan?” Does it mean that “it” contains no parts derived from other animals? – or does it mean that “it” is a product or something that vegans who recognise veganism as an ethic and not a diet can be happy and content with?

When we ask, “it is vegan?,” are we merely concerned with a list of ingredients, or do we have a much wider remit that is interested in how and in what circumstances were “it” – or the ingredients of “it” – obtained and produced? It seems to me that vegans are interested in that much wider question – we want to know if the item “contains” suffering: we should want to know if rights violations were involved in the making of the item.

Since its inception in 1944, veganism has been seen by vegans themselves as a proper and constituent part of radical social movements working towards peace, fairness, social justice, non-violence, anti-discrimination, and so forth.

This means that palm oil is not vegan. Like the famous Irish drink, Guinness, palm oil contains no animal ingredients, that is true, but its current method of production results in suffering and rights violations. Such a product cannot be vegan by definition. A product may be made entirely from plants but that does not make it vegan. Something that arises through the suffering of others, through others having their rights violated, cannot correspond with efforts towards peace, non-violence, and justice. It does not correspond with the thrust of the philosophy of veganism.

Donald Watson is the best-known co-founder of the British Vegan Society and he saw the vegan movement and the peace movement as intertwined. Perhaps as a forerunner to the more developed idea of alliance politics, he suggested that many people will become vegan as part of their “peace aims.” His brother and sister also went vegan and became conscientious objectors in WWII as Watson himself did. When Watson spoke about important social movements, he also seemed to talk about veganism and the cause to end human slavery as interlinked and having similar aims. He believed that the vegan ethic “covered” other social mobilisations, including movements that saved human lives, declaring a “soft spot” for lifeboat and mountain rescue personnel, especially because they are all volunteers.

He suggested that veganism is a humanitarian movement that provides members the opportunity to express the things they “stand for” in life; a radical social movement that may alter humanity for the better, and help to increase the very survival of the planet. He argued, therefore, that we need to take a broad view about what veganism is and about what it means. Vegans must think beyond diet, he said, and realise we are part of “something really big;” that vegans are engaged in a pioneer movement that will aid human evolution and the “moral development” of humankind. Believing that veganism will help to bring about a different sort of human being, he plainly thought that human animals matter. Watson suggested that vegan ethics will bring forth a new “civilisation,” and perhaps forge for the first time in human history a world and a humanity that truly deserves that name.

He said that vegans go beyond “live and let live” and believe in the notion of, “live and help live.” This means, he argued, that veganism includes caring about the exploitation of all sentient life.

While Donald Watson’s BBC News obituary correctly describes a vegan as someone who “eats a plant-based diet free from all animal products including milk, eggs and honey,” and points out that, “Most [sic] vegans wear no leather, wool or silk,” it is clear that Watson saw veganism in much broader terms than this dietary definition, and regarded the vegan philosophy as a means of assisting all animals, nonhuman and human, as well as the biosphere on which they live and depend.

Recent ideas in the animal advocacy movement, that human rights and animal rights are distinct issues; that veganism is some apolitical commodity that can be sold on the high street like cheap fashion items, seem to me not only wrong, they seem dangerous – and they certainly go against the type of thinking of those who formed the vegan movement.

Animal liberation, human rights, one struggle, one fight, is more than a slogan on a t-shirt or placard.

Permalink Reply by veganpilotmarty on September 28, 2013 at 12:34
I think we have an obligation to mitigate suffering wherever we can but we as vegans sometimes lose sight of the big picture today. I love the idea of focusing our concern on a smaller segment of veganismic ideals, (ah, a new word perhaps), but today is today and not 200 years in the future. Lets get people to do the easier stuff, like not eating the animals, and we can worry about the suffering levels of the different non animal/non animal product/non animal processes foods down the road.

What a wonderful and thoughtful article, Roger, to which I heartily agree with. If Veganism stopped at just the diet aspect, we have a term for it, it's called Pure Vegetarianism (devoid of animal products but that ends there). Veganism is and always has been a human rights, a women's rights, and other right's issue as well. Everything is connected. The consumption of Palm Oil kills Orang Utans. The link to animal rights issues is clear. And it also destroys lives which makes it a human rights issue. I can't distinguish between social issues as some people in the Vegan movement seem to want to do. That is why, for instance, I have a big problem with PETA doing sexist campaigns and cheapening two causes: animal rights and women's rights.

If Veganism, as Donald Watson clearly stated, is about reducing suffering, we have a clear obligation to take all the issues seriously whether they concern non-human animals or human animals. The Earth is not made of separate biological entities which don't affect each other. Science (and spirituality) shows that everything is in fact influencing all the parts. What happens with our consumption of Palm Oil will eventually have a ripple effect on us and not just other animals.

Thank you for this great article.