This article, from Michael Budkie, of S.A.E.N. (Stop Animal Exploitation NOW!) is incredibly powerful and insightful. I urge anyone who reads this article to take action and make a difference, by contacting Dr. Gibbens, whose details are at the end of this important article.

Her birth date is recorded as 1/1/00. Her journey to the United States began overseas in China. Huge breeding farms in this nation hold tens of thousands of primates in captivity before sending them to the U.S. Facilities in this nation are virtually unregulated. The photograph of the rusted enclosure above is from such a facility.

She spent almost a decade in the U.S., apparently in the Alice (TX) holding facility owned by the Covance Research Products Company. During 2009 she was treated a total of 20 times including physical examinations, TB tests, treatments for parasites, weighing and physical exams. According to these records, nothing was wrong. In fact, she was examined only ten days before her death, and nothing was noticed. She was given a clean bill of health.

She arrived at the University of California, San Francisco (UCSF) on 10/29. Her records from UCSF paint a very different picture from the official Covance record. At 11:51 am she is listed as having “Several fresh puncture wounds on extremities (upper and lower).” There is “fresh blood in cage.” And she “is exhibiting SIB behavior (per DVM).” SIB means self-injurious behavior.

At 12:40 PM she is “Sitting up . . . several fresh abrasion/red marks on ® upper & lower arm.” Shortly after this she is anesthetized for a physical examination, using ketamine and acepromazine. Additional dosages of these drugs are given to maintain anesthesia when she starts to regain consciousness. All in all she is anesthetized from 12:57 PM to 2:55 PM for examination. At 2:55 an intravenous catheter is inserted and she is killed with 3 ccs of Euthasol.

Her body is described “Multiple SIB puncture wounds on plantar surfaces (soles) of both feet and on distal portions of legs and arms. Many wounds appeared to be several days old and most of the wounds on the feet were inflicted during the SIB episode earlier today. Evidence of acute and chronic SIB. Several deep and superficial puncture wounds present.”

She was never named. We know her only as RQ5977. But her suffering was not unique, many primates from this Covance facility have major injuries.

RQ 4562’s right eyelid cannot close and the eye may have had a cataract. The right hip cannot fully extend and has muscle wasting. RQ5967 is missing the pinna of the left ear, the right 2nd finger is too short, and the right 3rd toe is missing 2 phalanges. RQ4373 has an eyelid that is scarred and fused to the eyebrow, which leads to overtearing. The pinnae of both ears are missing, the right thumb is deformed, the 3rd finger of the left hand is fused from an old fracture, part of the right mandible is missing,

Many other monkeys from this facility are missing fingers or toes, or have broken digits or damaged ears. Out of 31 animals discussed in these records, nineteen of them had an injury of one type or another, this amounts to an injury rate of 61.3%. So much for captivity keeping animals safe.

The massive Covance facility that shipped these animals is almost too big to imagine. The last inspection showed that 7861 crab-eating macaques and 5464 rhesus macaques, or 13,325 primates total, were imprisoned here as of June of 2011. This inspection report also shows that there is a significant problem with the monkeys developing frost-bite injuries on their tails due to inadequate enclosures.

The information discussed here is from records for only a few animals, but it provides a reasonable picture. If we extend these numbers out, then it is likely that 8168 of the animals at this facility are injured. Thousands are missing fingers, toes, ears, tails, eyelids, or possibly even entire arms or legs. This is a veritable army of cripples, but there is no war; thousands of injuries without a battlefield.

No place can the bloodbath be better seen than in that enclosure which held RQ5977 during the trip from Covance to UCSF. According to her records, many of her injuries were old, and so she may have been self-destructive while at Covance, before her trip began. By the time she arrived at UCSF she had multiple puncture wounds to her hands and feet, and all the way up her arms and legs. She was probably incarcerated in the small travel enclosure, not unlike a portable dog kennel, for one or two fear-filled days -- locked inside the belly of an airplane or the back of a truck. Totally isolated, with no idea what was happening to her, in darkness, possibly enduring changes in altitude, she simply could not control her fear and stress. Attacking the cage did no good. There was nothing else available but her own body. Her wounds were severe enough that the only option was to kill her.
I am thankful that her misery ended, that she was prevented from any more suffering. She has been released from a world which she probably saw only as suffering and agony.

In reality, I never looked into that carrier. I never saw that desolate creature. I didn’t look into her crazed eyes. I didn’t touch her wounds. I didn’t wipe the blood from her body or her cage. But the images which her simple two-page description has generated are permanently etched into my mind. I know what abject suffering looks like.

Her life could have been worse; all of her suffering could have been heightened. Upon surviving the trip, she could have found her way into an experiment that caused brain damage, confined her to a restraint chair, deprived her of water, or even bolted devices into her skull.

Imagine to already be so agonized and then to have these things piled on to your helpless consciousness. To be so inundated with suffering that misery is the sum total of your existence. Every second is confinement, thirst, pain, isolation, and fear.

I doubt that anything we can endure can be as terrifying and as soul wrenchingly painful as what RQ5977 endured. Her captivity, her insanity, her utter inability to change her situation in any way, and her total isolation are all beyond anything we can even comprehend.

As gut wrenching as her situation was we must not turn away from it, for that would be the easy way out. We must somehow make it part of ourselves. We must keep her in our hearts. We must remember her because we owe her that much.

She will never have justice. We cannot give her her life back. We cannot somehow magically put her back in the wild where she belonged. The ten years that she spent inside the Covance Concentration Camp cannot be undone.

Why was she there so long? Why wasn’t she simply sold sooner? The answer is breeding. There are now ten years worth of her sons, daughters, grandsons, and granddaughters -- generation upon generation of her progeny potentially at Covance. Or they may have been shipped to UCSF, in a cage just like hers. They could be at the University of Kentucky. It makes no difference where they are imprisoned, they are still inmates. They have an inheritance of confinement, a legacy of agony. It is up to us to do something about this. We owe it to them and to her.

The next time that our work seems overwhelming, the next time that the pictures are too hard to look at, the next time that it all seems too difficult, remember RQ5977. We owe her, and her children, a debt that cannot be paid. Remember them and keep going. Keep pushing, keep fighting, keep protesting – never give up. Members of our species have done this terrible thing to her and her family. Remember the eyes of this terrified, injured, bleeding monkey. Look in deeply. Drink in the agony of her soul. Drown.

It is up to us to make this right.

Please contact Dr. Gibbens and demand that he take immediate action against the Covance Research Products facility of Alice Texas for the deaths and traumatic injuries of multiple primates. 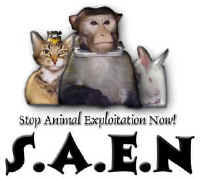