What Impact Do "Celebrity Vegans" Have On The Vegan and Animal Rights Movement?

What do you think: Are celebrity vegans having a positive impact on the movement and helping to raise awareness about veganism and animal rights, or is this just another fad that they will move on from when the next "cool thing" comes around? 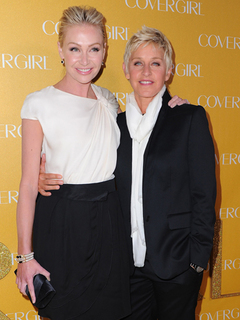 The very talented Ellen DeGeneres and Portia de Rossi are set to open a new vegan restaurant in Los Angeles.

The Pretenders singer Chrissie Hynde, whose own vegan establishment sadly shut down earlier this month is also involved, as well as film producer Steve Bing.

The new eatery will be located in the San Fernando Valley, and will feature a menu created by vegan chef Tal Ronnen (who catered Ellen and Portia's wedding) and be designed by the famous Waldo Fernandez.

In other words, this is going to be a seriously luxurious and upscale gourmet vegan establishment.

But it's not just this new restaurant that Ellen is interested in. She is also making veganism easier and more accessible in other ways.

In August, she launched the website Going Vegan with Ellen, a resource that includes recipes, how-tos and other helpful information on veganism.

Do you have an opinion on this, and the impact "celebrity vegans" have on the movement?

That's a very interesting article, Roger. It's kinda encouraging to read that celebrities might not be as influential as we think.

I believe she's genuine in her commitment to veganism too. Her and Portia sponsor a cow at The Gentle Barn [http://current.com/groups/veganism/92757233_portia-de-rossi-and-ell...] and have worked with Farm Sanctuary.

I don't like it when other vegans jump up and down about people like Mike Tyson, who still uses other animals and races pigeons, but I can't complain about Ellen being a representative of ethical veganism.

Oh please.  Can you honestly tell me that someone promoting PROCTOR & GAMBLE products, with Covergirl commercials since at least , is Vegan?

Ellen's contract with Covergirl was in place before she became vegan. What would you suggest she do about a legal contract upon becoming vegan?

I agree with Roger.  Breaking her contract with Cover Girl would be a huge opportunity to educate the public about animal testing.  Most people have no idea that cosmetics are still tested on animals...and if they do, I'll bet the majority assume Cover Girl is one of the non-testing companies since "Ellen the vegan" endorses them.

I suspect CG would even prefer to quietly let the contract be terminated rather than trying to financially ruin such a well-loved celebrity and bring any attention to their abuse of animals.  I'm sure she'd pay a big price financially but what a voice she could have for these animals.  It's hard to understand how she considers herself an ethical vegan and chooses to continue being the face of Cover Girl.

I think it's great ... in the same way it's great when anyone starts thinking about what they're doing and how it affects others. Celebrities are people trying to figure out their way in the world, just like the rest of us. So. if they're vegan, great. If they're imperfect vegans and maybe say the wrong thing or say it the wrong way? Oh well. I haven't met a perfect vegan yet.

The difference is that more people pay attention to what celebrities are doing. But I think this can be great as well. Ellen did an interview with Katie Couric and talked about being vegan. Ellen botched it trying to be witty when talking about animal rights, but she did get the idea out to many, many people that animals have the right to their own lives. That's huge. Just like the rest of us, some of them will become ex-vegans. It happens. Move on.

What I believe is that we're all in this together. Even those darn Francionists are playing a part in furthering veganism. So are the celebrities. So are we here. So are the cupcake activists, so are the food bloggers, so are the animal rescuers, the academics, the puritans, the more imperfect and the less imperfect. We all are. And that's a good thing, imo.

Ellen DeGeneres, no matter how inconsistent she might be, is probably getting more people into veganism than I’ll achieve in my entire life.  So I agree with Lisa Viger that this is a good thing.

Of course, people going vegan because of what a celebrity does are not usually committed to the philosophy, and many of them will relapse.  But if we only want philosophically committed vegans then we’re going to remain a small exclusive club for a long, long time, because philosophy is not what drives human behavior.

Most human behavior is not caused by values or logic or philosophy, but by the unconscious acceptance of cultural conditioning and social norms.  Until veganism is perceived as a social norm it will have little or no impact on most people’s behavior.

I assume that all vegans agree on the goal of changing society?  A hundred people adopting a more-or-less vegan lifestyle for a year, and then relapsing, will have far more impact on society than one person going vegan for a lifetime.  That’s because the numbers count.  It’s not consistency that influences people.  It’s numbers.  To promote the acceptance of veganism as a social norm we need the numbers.

My sentiments exactly Lisa!  No one in this world is perfect..there are no perfect vegans either. Perfection does not exist.  Therefore, where ever someone, anyone becomes vegetarian and then vegan, that is great.  Especially if a celebrity becomes vegetarian and/or vegan, I feel that is great! I feel any attention to the right way is awesome. From that exposure I am sure that information gets spread to many, many people that might not have been interested in the past. Many of those that love Ellen and follow her will want to follow her in her into veganism. I believe it is a process to become vegan. Few people become vegan overnight and the more that it is put out there, the more it can spread.

I do wish that she would not sponsor any company that is a detriment to the cause, however, I don't think any less of her, unless and until, I find out that she is doing it on purpose and really doesn't care about what happens to animals. I can only hope that at some point, in her own time, with her own conscience, she will make the decision to break ties with P & G and not renew her contract. Did she know beforehand that they were a company that tested on animals? Was she vegan then? Does she know now? Is she blatantly choosing to sponsor them and not care that they do that? I don't know what is in her mind, I am sure there are many vegans currently that aren't aware they do. I don't know who else does. It doesn't matter to me, to me, it matters that she is vegan, she is out there talking about it, spreading the message, the education and reaching people that most of us are not able to reach.

There are celebrities that become either vegetarian and/or vegan and then relapse. It happens to many for many reasons, some go back and forth for a while before ending up back on the right path in their own time.  It happens to people also that are not celebrities. Because we are all people. People are not perfect. The person that berates and/or judges someone so harshly for not being perfect, I feel, dabbles in hypocrisy because I doubt they were/are perfect and I also don't believe there is anyone that is 100% vegan because in this world it is virtually impossible to be a perfect 100% vegan.

I believe that a drop in the bucket eventually fills the bucket, so I am always happy when I hear that a celebrity has become vegan.

So, I totally believe that "celebrity vegans" definitely have an enormous impact on the vegan and animal rights movement at the end of the day.

I think that they tend to distract from the AR message.  Distracting doesn't happen IF we don't KNOW that they're vegan, but when AR and vegetarian media play up their diets (does diet mean abolitionist or pro-animal beyond petting pets or urging welfarist measures?), the public hears a celebration of celebrities.

Then there are all those FORMER vegetarians jumping ship...  What an embarrassment for the organization or individual who 'wrote a blank check' (of endorsement) to the celebrity, who 'ditched duty' and joined the lumpen masses (for some trivial reason, or akrasia - weak will, or "whatever" - not caring - or not caring any more).

Think of William Shatner, who made "Vegetarian World" (the reel-to-reel movie, then did Priceline.com, then Boston Legal, etc.).  NOW, William Shatner is a poster child for filthy habits and filthy thinking.  That makes clean-living vegetarians one more rotten, stinking corpse to avoid.