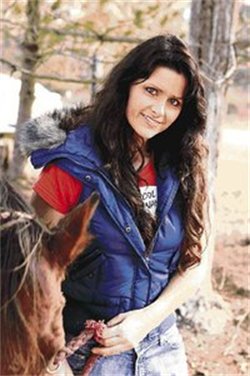 Animal Rights Zone is pleased to announce that vegan activist and advocate against discrimination and oppression, Kim Hollingsworth, will be taking questions from members in a new ARZone interview.

Kim is a vegan animal advocate from Sydney, Australia, who has made a difference in the lives of countless other animals, with a recent focus on horse rescue.

Kim has been a vegetarian since childhood, when, at 18 months of age, she carried a “laying hen” inside her house, much to her mother’s dismay, because she was concerned for her in the cold weather. She found out very early on where “meat” came from, and simply refused to have any part in it, going on to live vegan in the 1990’s. This was inspired by a particularly close relationship Kim had with a mouse who died in her hands. She made a promise to her that she would always live vegan.

Kim is well known for her time spent in the New South Wales Police Force and the struggles she faced retaining her position in the police force based on her history in the adult entertainment industry. Kim showed incredible courage in her fight against discrimination and oppression during this time, and had her plight featured in the high rating Underbelly television series in 2011.

Recently, Kim has been very busy advocating for horses who are often discarded by humans, becoming known as one of the driving forces behind horse rescue in Australia, and, again, is finding oppressive attitudes something she needs to overcome in order to achieve her goals.

Kim welcomes the opportunity to take questions from ARZone members, which must be submitted to ARZone no later than Friday 17th of February via Carolyn@ARZone.net.