Don’t eat Friends is an Animal Protection Organisation founded by vegan rock star Xie Zheng in 2007. The non-profit, based in Beijing, makes information available on various aspects of taking care of animal companions. In addition, volunteers help to rescue more than 30 homeless cats and dogs each month. Xie Zheng, the lead vocalist of the popular band Giant Beanstalk, has taken part in a number of vegan charity concerts. In 2008, the “Don’t Eat Friends” tour was very successful in 10 cities. The compassionate musician has also held eight “Don’t Eat Friends to Save the Bear” concerts, three “Don’t Lose Hope, My Little Fox, Anti-Fur-Concerts,” and seven “Vegan – Don’t Eat Dogs and Cats” concerts. Xie Zheng has joined hands with other rock bands and the Chinese Vegetarian Union to launch “Don’t Eat Friends, Go Vegetarian: Save the Black Bear, Reject Bear Bile” concerts. Xie Zheng enjoys a simple lifestyle. In order to conserver natural resources, he uses a bicycle as his main means of transportation. Video sourced and translation by NT.

Please see another post about Vcats. They adopted some cats that had been rescued from slaughter in Wuhan on 14th January 2014.

Apols for my late acknowledgement. Thanks muchly for sharing Xie Zheng's photo! His doggy has recovered real well from time in previous photo, thanks to the love & care so diligently given :) God bless u guys.

You are right Siuyin Ho!

Although Xie Zheng is a man :o) 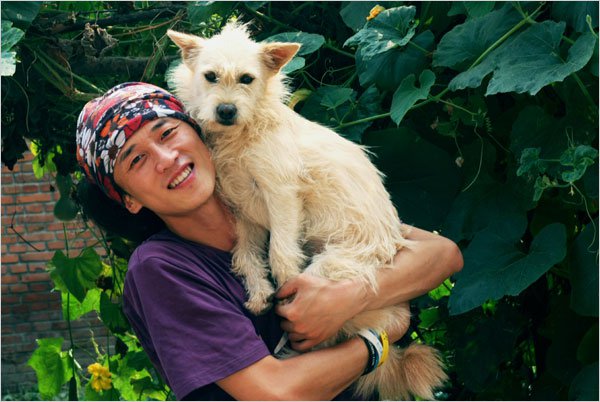 Just wonderful! What a truly inspirational endeavour by this woman Xie Zheng. I am so glad there are people like her in Beijing standing up for what really matters and yes, there's no denying it, compassion should be at the heart of every bond of friendship whether its' between humans or between humans and animals. When we really care about someone, our heart is there for them and we want them to be happy and their life to be free from unnecessary pain and suffering. When we show compassion, we are learning the true meaning of love.