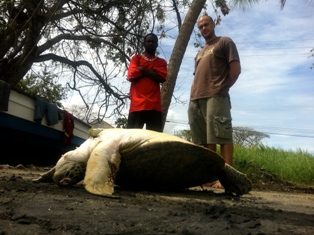 Shocked by finding out that up to 15,000 vulnerable and endangered sea turtles are killed in Trinidad and Tobago each year during a legal five month hunting season, environmental activist Pete Bethune joined forces with local activist group, the Trini Eco Warriors Trini Eco Warriors, with a goal of encouraging strong measures to put an end to the practice.  This was the first mission for Bethune’s new marine conservation organisation, Earthrace Conservation Earthrace Conservation.

The Trini Eco Warriors, Kyle De Lima, Marc de Verteuil and Stephen Broadbridge, together with Bethune, met this week in Trinidad with Mr Vasant Bharath, Minister for Agriculture and Fisheries, and the Director of Fisheries, Christine-a-Shing, together with four Government advisors.

During the meeting with the Ministers, Mr Bharath made a commitment to present a law protecting all turtle species year round in Trinidad to the Cabinet, and would see it passed into law before the end of this year.  Rumours in Trinidad and Tobago are suggesting that the law may be presented to Parliament as early as this week.

Bethune and the Trini Eco Warriors took with them a 110lb live green sea turtle rescued from a local beach, where it had been lying on his back in the sun waiting to be sold for around US $1.5 per lb.  Bethune said, “Sometimes these turtles are left upside down for weeks at a time, waiting to die.  We took the Ministers and the advisors down to see the turtle and they looked very shocked.  Obviously the Government are aware of the hunting season, but I don’t think they’ve ever bothered to investigate or go and see for themselves what long, drawn out agony the ‘hunting’ really involves for the turtles.”

Kyle de Limo said, “I am very encouraged by the Minister’s announcement.  We will continue to monitor the progress of the proposed new legislation, and will not stop until we ensure that the Minister honours his commitment, the law is passed, and we can see that it is being rigorously enforced across the whole of Trinidad and Tobago.”

Bethune said, “I am pleased that we were given a chance to speak directly with the Ministers, and that our request for action to protect and preserve these incredible creatures appears to have been listened to.  However, I will not be celebrating until the new laws are introduced, hopefully before the start of the new hunting season in October.  We also want to see the current laws more strongly enforced in the meantime.  Earthrace Conservation will be returning later this year to find out for how things are progressing.”

An additional and very real threat to the turtles is the risk of becoming by-catch in fishing nets.  Estimates are that around 1,000 Leatherbacks die outside the hunting season due to drowning in nets.

According to the Director of Fisheries, Christine-a-Shing, the Fisheries (Conservation of Marine Turtles) Regulations, stipulate that all medium and large trawl vessels operating since 1994 with mechanically operated net retrieval systems or hydraulic winches, should be fitted with Turtle Exclusion Devices (TEDs).

However, as Kyle de Limo said, “In reality, these laws are flouted and unenforced.  We have spoken to many fishermen here who say they have never even seen a TED.  The Minister informed us at our meeting that she would be very interested to see any video or photographic proof that vessels were not using TEDs, and we will be providing her with that in the hope that it persuades her to ensure that the law is enforced and that there are strong penalties for ignoring it.”

The rescued sea turtle, estimated to be around 15 years old, was suffering from lesions that were removed before it was fitted with a transmitter and released from an island about five miles away from Port of Spain in an area with fewer hunters.  The turtle is swimming well and is now in Venezuelan waters in the Gulf of Paria.

Bethune said, “We named the sea turtle ‘Bobbo’ in honour of a benefactor who supports what we’re trying to achieve.  When we released it, it slowly moved over the sand and gradually swam away.  After about 20 metres, it realised it was free and just took off like a rocket.  It was an amazing moment.”

There are only five days left of the legal hunting season, so Bethune and the Trini Eco Warriors are hopeful that this turtle at least stands a good chance of survival and that it will return some time in the future to a coastline that offers full legal protection to all turtles all year round, regardless of whether they are nesting females, males or hatchlings.

The transmitter sends out a signal that can be tracked via satellite, and the rescue team hope that this will show local people and others around the world that far from being indigenous to any particular country, sea turtles travel many thousands of miles around the oceans on their migratory journeys and therefore no one individual or country has the right to kill and profit from them.

“We hope to fit more turtles with trackers in future, not just in Trinidad and Tobago, but in other places where sea turtles are still considered ‘fair game’.  They cost around $2000 each, but I hope ‘Bobbo’ is just the first of many”, Bethune said.

Comment by Beverley Bailey on February 26, 2011 at 20:32
Hmmm, Bobbo is a brilliant guy who helped out the team on Earthrace when they broke the global circumnavigation speed record (using only biofuel from sustainable sources).  He's still a great supporter of Pete and Earthrace now so it was felt he deserved the accolade.  Not sure how he feels about have a turtle named after him, especially if it might be a girl...

Thanks, Beverley. I appreciate the information! :)

I hope Bobbo is male though, with a name like Bobbo! :)

Comment by Beverley Bailey on February 26, 2011 at 20:10
Hi Carolyn, no details on the new legislation yet but we'll keep everyone posted.  As to the he/she/it issue, no idea whether Bobbo was a male or female.  The idea was to return 'it' to the ocean as quickly as possible with the least amount of stress so the decision was made not to sex this particular sea turtle.

Do you have a copy of the new law that is expected to be passed? Or even details on what it contains?

I find that many humans believe these atrocious actions are acceptable because they believe that most other animals are mere property. I find it very helpful, when speaking about other animals, to refer to them, always, as the individuals they are. Terms like he/she as opposed to it encourage the acceptance of any other animal as an individual, not a piece of property like a chair or table, which we would refer to as it.

Anyway, I find this very helpful.

I look forward to hearing about the terms of the new law expected to pass in T&T.