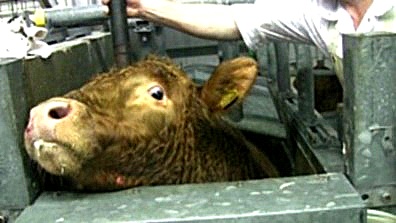 Factory farms aren’t about feeding the hungry or harvesting healthy food. They’re about maximizing profits for a handful of the world’s largest agribusiness corporations, and the biotech and pesticide companies that fuel their factories and feed their animals.

Today, nearly 65 billion animals worldwide, including cows, chickens and pigs, are crammed into CAFOs and slaughtered annually. These animals are literally imprisoned and tortured in unhealthy, unsanitary and unconscionably cruel conditions.

Factory farms produce unhealthy animals. And unhealthy people. About 80 percent of all antibiotics used in the U.S. are used on factory farms, either to prevent disease or stimulate growth. Meanwhile, about 70,000 Americans die each year from “superbugs” that have developed a resistance to antibiotics.

Over 300 million: The number of laying hens in the United States; of these, some 95 percent are kept in wire battery cages.

67: The average number of square inches of space allowed in each hen’s wire battery cage - less than the size of a standard sheet of paper.

72: The number of square inches of space a hen needs to be able to stand up straight.

303: The number of square inches a hen needs to be able to spread and flap her wings.

2 ft: The width of a factory farm sow cage - too small for them even to turn around or lie down comfortably.

2 ft.: The width of a factory farm cage for calves who are raised for veal.

None: The time provided to chickens and hogs raised in factory farms to spend outdoors, breathe fresh air or experience natural light.

None: The time provided to dairy and beef cattle to graze in a pasture where they could express their natural behavior (and ideal diet).

80: The percentage of antibiotics used in the United States that are given to farm animals, as a preventative measure or to stimulate growth. Growth stimulants are prohibited in Europe, but not here.

23 million: The number of pounds of antibiotics added to animal feed every year, to make the animals grow faster.

875 million: The number of U.S. animals, or 8.6%, who died lingering deaths from disease, injury, starvation, suffocation, maceration, or other atrocities of animal farming and transport.

220 billion: The number of gallons of animal waste dumped by factory farms onto farmland and into our waterways every year.

70,000: The number of Americans that die every year because of force-feeding animals antibiotics that helps breed antibiotic-resistant “superbugs.”

5,000: The number of deaths per year from food borne illnesses in the U.S.

4.5 million: The approximate number of Americans exposed to dangerously high nitrate levels in their drinking water. Agricultural Waste is the number-one form of well-water contaminants in the U.S.

14: The percentage of factory farm chickens that tested positive for salmonella.

68: The percentage of chickens with salmonella that showed resistance to one or more antibiotics.

40: The percentage of cows in industrial dairies that are injected with genetically engineered recombinant bovine growth hormone (rBGH) to increase their milk yields.

70: The percentage of chicken producers that used the toxin roxarsone in their feed additives between 1995 and 2000.

Over 90: The percentage the U.S. Department of Agriculture (USDA) scaled back testing for mad cow disease starting in the fall 2006, claiming that testing was expensive and detection of infected cows was rare.

Nearly 43: The percentage of large-scale dairies (over 500 head) that used rBGH on their cows in 2007, compared to 30 percent of mid-sized dairies, and nine percent of small dairies.

The main reason that abuse and torture of food animals happens on commercial farms is not because factory farming is corrupt. It is not even because Big Ag execs are greedy, or because factory farm workers are often desensitized and sadistic, though all of these are factors. But the most important reason that abuse and torture of food animals happens is that consumers, including “humanely raised” customers, are sending the message that it is morally acceptable to harm and kill animals for pleasure. You cannot pay people to inflict unnecessary violence on animals (killing them for food we don’t need), and then make the case that those animals should not experience unnecessary suffering. It is a morally schizophrenic, and therefore ignorable, position, one that is easy for producers and most consumers to dismiss. If animals’ lives don’t even matter enough for us to spare them when we have access to plentiful food alternatives, then on what grounds could their suffering possibly be said to matter?

As long as we’re willing to treat sentient individuals as units of production, and numb ourselves to the fact that we are inflicting gratuitous violence and death, then we’re doing nothing more than reaffirming the core values of factory farming: that animals’ lives have no intrinsic worth, and that it is okay to exploit and kill them even when doing so is not necessary to our survival. As historian James McWilliams has written:

“Supporting alternatives to the industrial production of animal products serves the ultimate interest of industrial producers. The decision to eat animal products sourced from small, local, and sustainable farms might seem like a fundamental rejection of big business as usual. It is, however, an implicit but powerful confirmation of the single most critical behavior necessary to the perpetuation of factory farming: eating animals. So long as consumers continue to eat meat, eggs, and dairy — even if they are sourced from small farms practicing the highest welfare and safety standards — they’re providing, however implicitly, an endorsement of the products that big agriculture will always be able to produce more efficiently and cheaply. And thus dominate.”

Harming Animals for Pleasure Is Not Humane

The very existence of labels like “free range,” “cage-free,” and “humane certified” attests to society’s growing concern for the welfare of animals raised for food. But any time consumers of meat, eggs or dairy advocate for “humane” treatment of farm animals, they confront an unavoidable paradox: the movement to treat farm animals better is based on the idea that it is wrong to subject them to unnecessary harm; yet, killing animals we have no need to eat constitutes the ultimate act of unnecessary harm.

Scientific evidence has irrefutably demonstrated that we do not need meat, milk or eggs to thrive, and that in fact these foods are among the greatest contributors to the leading fatal Western diseases. Unlike animals who kill other animals for food, we have a choice. They kill from necessity. We do so for pleasure. There is a huge moral difference between killing from necessity and killing for pleasure. When we have plentiful access to plant-based food options, and a choice between sparing life or taking it — there is nothing remotely humane about rejecting compassion, and choosing violence and death for others just because we like the taste of their flesh, and because they cannot fight back. Might does not equal right.

While it’s sometimes possible to find small farms where the animals have better lives (though this in no way justifies exploiting or killing them), it’s important to realize that humane welfare labeling is largely a marketing ploy that preys on consumer willingness to pay more for better treatment of animals. If you’re buying “cage free,” “free range” or “humane certified” animal products from a grocery store, you are more than likely being deceived about the welfare of animals raised for food.

Because “humane” labeling terms are not meaningfully defined or enforced, suppliers are notorious for manipulating intentional loopholes in these loosely interpreted standards. In a recent report, even Trader Joe’s “cage free” egg suppliers were found to debeak their hens, which means the birds also live in severely crowded facilities. Massive confinement operations, like Sparboe Farms and Perdue Farms, that confine millions of chickens in deplorable conditions, are awarded “humanely raised” certification through a USDA-sponsored fraudulent labeling scheme. And there is simply no such thing as a happy dairy cow. - See more at: http://freefromharm.org/animal-products-and-ethics/a-comprehensive-...

Many of the worst cruelties inflicted on animals in factory farms are also routine practices on small, free-range farms. These include:

Sexual violation and exploitation of reproductive systems: The forcible insemination of restrained females, often painfully and always without their consent, is standard practice on farms large and small. Forcibly inseminating others against their will is considered a serious crime when the victims are human. Yet we sexually violate billions of individuals this way every year, breeding animals for the sole purpose of exploiting and killing them. Sexual abuse is not humane.

The systematic sabotage of motherhood: On all farms, big or small, dairy cows have their babies torn away from them so humans can drink the milk intended for their young. This cruel separation is devastating for cows and their calves, who are slaughtered for veal or beef if they are male. And while the term “mother hen” derives from the fact that hens are such protective, nurturing mothers, “free-range” egg farms perpetuate unfathomable cruelty by buying their hens from egg hatcheries where confined breeding hens never even get to see their babies, and millions of day-old male chicks are brutally killed because they’re of no use to the egg industry.

Routine mutilations without anesthetic: Castration (males except breeders), dehorning (male and female cows and goats), nose rings (free-range pigs), and ear tags or flesh “notches” (sheep, pigs, cows, and goats) are all painful mutilations commonly practiced without anesthetic on even the most “humane” farms. Most eggs sold in stores under free-range or cage-free labels come from hens who are painfully debeaked.

Denial of instincts and preferences: Even on small, “humane” farms, animals have no control over the most important aspects of their lives. Consider that the following is true for all animals on all farms, however small or so-called “humane”:

If these were the circumstances of your brief and unfree life, at the end of which you would be forcefully restrained, attacked and slaughtered against your will, at a fraction of your natural lifespan, all for completely unnecessary reasons — would you maintain that you had been humanely treated?

The Death of the Myth of Humane Farming

Animal agriculture is “the most large-scale, institutionalized control of female reproduction, sex, and bodies-in-general that has ever existed.” It is a mistake to think of small, so-called “humane” farmers, and large, industrial producers, as occupying vastly different moral terrain. They are gradations along the same continuum of exploitation and needless harm. Small and large farmers alike conceive of animals as property, commodities and units of production, here for us rather than with us. If we can look at animals as intelligent and loving and playful as our own cats or dogs, and think: Yes— but my desire for a fleeting pleasure is worth more than that individual’s entire life — then we can not make any meaningful arguments about how those animals should be treated. It is no more humane to inflict unnecessary death on animals who want to live, than it is to inflict unnecessary suffering on those who wish not to suffer.