Four women on bail for a battery hen rooftop protest locked down to battery hen cages at 4.30am this morning, defying their bail condition and facing almost certain prison for their actions in defence of hens.

"The hens imprisoned in this shed are screaming for their lives, but nobody hears them. Today, we hope the public listens."  Felicity Andersen currently chained to cages crammed with laying hens.

Four Melbourne women, three of them mothers are putting their own health and freedom at risk in a determined appeal to awaken the public to the alarming cruelty, filth and sickness inside animal agriculture. The women are chaining themselves inside an egg factory where they are forced to wear gas masks with chemical filters to protect their health, since they plan to stay locked to the cages until the authorities take clear action to help these sick animals. Such are the disgusting conditions inside animal production factories that the air is not even safe to breathe over a few hours. Imagine how these animals suffer breathing it 24/7. Millions upon millions of animals in Australia never ever see the sun rise or the light of day.

The women are also risking their own freedom and face jail, as by taking this action they are breaking bail conditions not to return to this egg factory. Last May the four were arrested during a rooftop protest at the property less than an hour south of Melbourne. The women had previously witnessed the horrific suffering inside the sheds and felt compelled to take to the rooftop to raise the alarm. Three sheds are currently in production, one with caged hens and two sheds with so called 'free range' hens who supposedly have "unlimited access to lush pasture" when evidence points that these birds are hardly, if ever, outdoors. This egg factory where the women have chained themselves is typical of egg production in our community. Thousands upon thousands of animals crammed together in small spaces and kept alive with routine antibiotics in their feed/water.

The women saw hens crowded 6, 7 and even up to 8 in tiny cages stacked four tiers high in rows longer than the eye can see. Many of the birds suffered severe feather loss, some were bald. Dead bodies were rotting in the cages being pecked by the living hens. The air was putrid and the cages held both young and old birds which spreads disease. In the 'free range' sheds the birds were living on their own droppings inside a huge shed, some were dying in the litter and being pecked by the other birds.

Patty Mark said today:"Animal Agriculture is destroying not only the animals, but our environment and our collective humanity. For over 30 years I've struggled, alongside many brave and committed people to help these animals and to encourage compassion and justice in our community. I don't want to trespass and have to wear a gas mask to help these hens - but even more so, I don't want them to suffer and die in such filth and degradation. We need the public to speak out and to stop paying for these cruel and unhealthy products. The legal authorities consistently fail to act, both the DPI (Department of Primary Industry) and the RSPCA are in bed with the egg industry, neither have ever, over countless years, acted on any of our strong evidence of abuse."

Jo Osborne, who is also locked down added: "What I have witnessed in this shed is a living nightmare.  The egg industry is rotten to the core, operating outside of the law and concealing their dirty secrets from consumers." 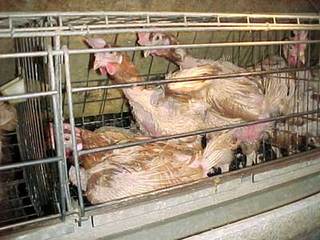 Links of photographs and two videos taken at the Somerville Egg Farm in 2011:

thanx for posting carolyn - this action is amazing . xactly what the AR movement is so desperatly short of rite now -genuine, direct,effectiv action which saves lives now as well as exposing the truth behind animal exploiters countless lies.

this is the real meaning of activism for animals