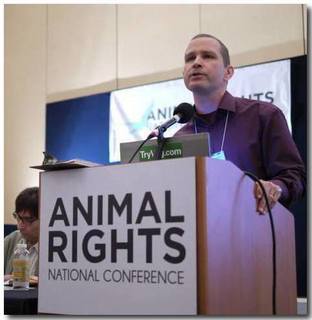 This year's National (US) Animal Rights Conference saw the eagerly awaited debate, framed as 'What About Abolition and Welfare', between Bruce Friedrich, Senior Director for Strategic Initiatives at Farm Sanctuary and Gary Francione, professor of law at Rutgers University.

After a brief introduction and explanation of the debate format from moderator, Dr. Will Tuttle the debate began, with both speakers each having ten minutes for their opening statements, followed by 25 minutes of questions from audience members, and concluding with 2 minutes of summation from each speaker.

The following video is an unofficial video, uploaded to You Tube by an audience member. (Read a review of the debate here).

The earlier speech from the same conference, by Gary Francione, referenced in the debate can be heard HERE.

I have no clue where Bruce Friedrich gets his psychological studies. He has not been honest before when he showed the spotless "colony cages" which have nothing remotely to do with the reality. Also, the idea that eating "humane" will lead to abolition is a myth. As this article below explains:

"Consider the parallelism of these two passages, the first from the New York Times, and the second from the website of a new animal industry marketing campaign in England:

Although the C.I.A. has faced criticism over the use of harsh techniques, one senior intelligence official said detainees had not been mistreated. They were given dental and vision care as well as the Koran, prayer rugs and clocks to schedule prayers, the official said. They were also given reading material, DVD's and access to exercise equipment.

This is not veal from dimly lit crowded pens. These animals enjoy a very full life, with plenty of space and light, inside suitable buildings over winter and outside at pasture for the rest of the year; a varied diet; and the care of a foster cow when available.

Yes, poor orphaned calves destined for the butcher's knife are now going to be lovingly nurtured by a "foster mom" before their lives are prematurely snuffed out. And lest anyone feel bad about the brevity of the baby cows' existence, the industry helpfully points out that "with a life span of six months, they live twice as long as even the slowest growing chicken; they have the same life span as a good organic pig, and longer than many organic lambs."

So those who consume the flesh of these coddled calves are actually humanitarians solving an "animal welfare problem." By eating the unwanted male offspring of dairy cows, we will spare these unlucky newborns from the morally repugnant alternative, a shorter and more brutal life in a crate. One cannot help but recall the quote attributed to an army lieutenant during the Vietnam War who declared, "We had to destroy the village, in order to save it."

According to a newspaper report, nine days after the launch of this "Good Veal" campaign, veal sales at one English supermarket chain rose 45 percent. Notably, the campaign's website features the endorsement and logo of a large, well-respected European animal advocacy organization whose name begins with the word "compassion."