Hour of the wolf

Hour of the wolf

Mark Rowlands (born 1962) is a Welsh writer and Professor of Philosophy at the University of Miami and he has a wild surfer look with his shades and all. At times his hair is platinum white. He once lived with a wolf and he is always philosophising about the nature of consciousness, animal rights, applied ethics and what you can know from TV. He has written several books, including The Body in Mind, Animals Like Us, The Philosopher At The End Of The Universe, Everything I Know I Learned From TV, Fame and The Philosopher and the Wolf. 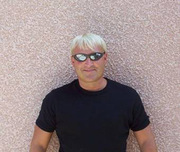 It's a long interview and it covers topics about the philosophy of mind and other things, but here is just one Q&A about the wolf that Rowlands lived with for 10 years...

3:AM: So you are a man who lived amongst wolves – well, one wolf, at least, Brenin – for a decade. Although the account is pretty amazing and funny and moving at times there’s also a serious philosophical point being made too, isn’t there? You are challenging any account of humanity that places a critical gulf, as you put it, between humanity and other animals. Or vice versa. You kind of think that what defines us best is credulity about ourselves, and that we end up losing sight of our place in nature. Is that right? Can you say something more about all this?

Mark Rowlands: Brenin was sold to me as a wolf. But I think it is likely that he was a wolf-dog mix. The book was about the ways in which we differentiate ourselves from other animals – the stories we tell to convince ourselves of our superiority. Each story, I argued, has a dark side – each story casts a shadow. And in each case, what is most revealing is not the story itself, but the fact that we believe it and think it important. I focused on three common stories. The first is that we are better other animals because we are more intelligent. The second is that we are better because we have morality – we can understand right and wrong – and they do not. The third is that we are superior because we, and we alone, understand that we are going to die. Intelligence, morality and our sense of our own mortality were the three major themes of the book. I am far from convinced that to any of these stories can establish or underwrite a critical gulf between us and other animals. But, in The Philosopher and the Wolf, I was more interested in what each story reveals about us. That is, I was interested in what our valuing of these things says about us. I argued that when we dig down far enough into the roots of each of these things, we find features of ourselves that are deeply unflattering. At the roots of our intelligence we find manipulation and machination. In the roots of our morality we find power and lies. And our sense of our mortality renders us fractured creatures, unable to understand ourselves in any satisfactory way. This philosophical excavation was woven into the story of the decade or so I was fortunate enough to spend living and traveling with Brenin.

Anyway, the whole interview is fascinating, please check it out here: http://www.3ammagazine.com/3am/hour-of-the-wolf/