ARZone has always been supportive of critical thinking and dialoguing. Further, we believe that all individuals have different experiences and beliefs and that we come to animal advocacy and social justice for different reasons. Such reasons, sometimes due to cultural traditions, economic disadvantages, and geographical location,  make it difficult for some to adopt a vegan diet.

We must respect and understand that we all have different struggles, and through challenging our own oppressive beliefs and actions and by respecting where peoples' journey for social justice takes them, we all will find a place of less violence, healing, and peace, where human and other animals, plants, air, water, and elements are not exploited or harmed.

To think critically about animal rights one will first acknowledge that there is nothing about the subject matter that is “off the table”. That is to say, one can’t think critically about the rights of other animals when one assumes from the outset that such rights exist. One may certainly insist that such rights exist, and further assert that all animals possess “equal inherent value”, and then do nothing more, but in so insisting and asserting, one will have abandoned the project of critical thinking with respect to the rights of other animals.

There are people who claim to think critically about the rights of other animals who nonetheless also insist without argument that animals “have rights”. Confused as they are over the nature of rights and what it means to have them, they do little more than repeat their claims as mantras, in the hope that should they make the same claims often enough, others will have no choice but to acquiesce. I wish them all the luck in the world. Many people, as we know, are like lemmings to the sea and I suppose that some people will accept that animals have rights when they’ve heard often enough the claims that they do. It can’t be helped that most people aren’t critical thinkers. Perhaps that will redound to the benefit of animals; I doubt it.

In any case, these people who drone on about animals as “persons” who are “rights-bearers”, who think of themselves as making an argument when all they’re doing is trying to coerce the gullible, whatever else they may be doing, they aren’t thinking critically about animal rights. I suppose that such people feel good about themselves, and about their dogmatic, anti-intellectual and faith-based certainty about “moral imperatives” and other dubious notions, and I am happy for them if they do feel good. Ignorance is bliss, after all, and who am I to deny anyone their bliss? 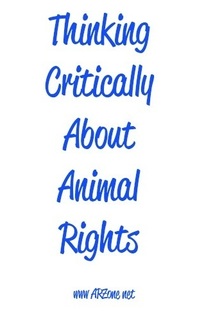