Euphoria? For Whom? ~~ Gary L. Francione

In my previous blog post, Partners in Exploitation, I discussed the various labeling schemes endorsed and promoted by HSUS, PETA, and other animal welfare corporations.

Well low and behold, yesterday, I went to the local Whole Foods Market, you know, the one to which PETA gave the Best Animal-Friendly Retailer award, and I picked up a copy of the Whole Foods magazine, “Whole Deal.”

And there was a coupon for “All Natural Brown Cow Parfaits,” which are apparently combinations of different flavors of yogurt.

Yogurt? But doesn’t that involve animal suffering and death?

Not to worry. As you can see: 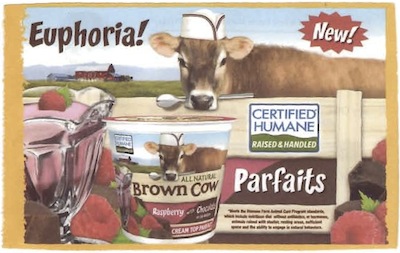 This yogurt carries the “Certified Humane Raised & Handled” label. The Certified Humane Raised and Handled Label is the stamp of approval of an organization called Humane Farm Animal Care, which developed the label with its partners, including the Humane Society of the United States. The HFAC/HSUS label is described as “a consumer certification and labeling program” to give consumers assurance that a labeled “egg, dairy, meat or poultry product has been produced with the welfare of the farm animal in mind.”

The fine print on the coupon says that the Brown Cow Parfait:

“Meets the Humane Farm Animal Care Program standards, which include nutritious diet without antibiotics, or hormones, animals raised with shelter, resting areas, sufficient space and the ability to engage in natural behaviors.”

The coupon has “Euphoria!” written at the top. “Euphoria” is defined as a “sense of happiness or well-being.”

And whose euphoria, whose sense of happiness or well being are we talking about?

One thing of which we can be completely certain: It is not the euphoria of the cow.

Comment by Lidia Belknap on March 20, 2010 at 4:33
Thank you, it is always painful to see such kind of things: when someone enjoys the product of suffering of another live being and on the top of that claims that that live being enjoyed that.