Dian Fossey was brutally hacked to death during the night of 26-27 December 1985 in her mountain cabin at Karisoke, Rwanda. Without Dian, there would probably be no mountain gorillas left to protect.

In April 1986 a special issue of IPPL News was issued. It contained a touching tribute by Colin Groves, "She Loved Gorillas and Mountains," and the fun "Boot Story," which was in a letter from Dian to Heather McGiffin.

Dian was a great letter-writer, and she used an old manual typewriter. Some of the letters she wrote to Dr. Shirley McGreal were 8 pages long, single-spaced! The newsletter also contains "His Name was Digit," a loving tribute by Dian to her favorite gorilla, Digit, who was killed by poachers who removed his head and hands.

At Dian's request IPPL ran side-by-side photos of Digit as a happy young gorilla and of him as he was found - Dian staged these photos to try to get the message of the horrific event to the world. As far as I know, only IPPL agreed to run them.

(The scan is difficult to read in places, if you require a sharper copy, please let me know.) 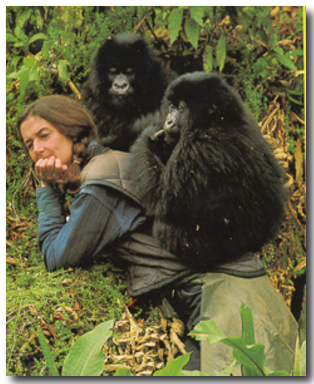 With much gratitude for this information to: