Did you know that the world’s current population of human beings is about 6.7 Billion?

That’s a lot of people!

If only 1% of them are vegan, that means that there are 67 Million vegans walking the earth right now. That’s a lot of people too!

So here’s the deal. Every vegan has one year to help one other person become vegan. Just one. Forget about reaching the masses, forget about starting a movement, forget about all that stuff. Just spend the next year finding one person who will commit, and I mean really commit, to ending all forms of exploitation of all other animals. If every person who is now a vegan would do that one simple thing, then 365 days from now there would be 134 Million vegans. Now we’re getting somewhere!

Guess what, in another year there would 268 million vegans. Just by having every vegan work all year long with only one goal in mind, and that goal is to find one new vegan.


One vegan, every vegan, each helping one new person become vegan every year for the next 8 years. The World is Vegan, if you want it. It’s not a slogan, it’s a plan.

UPDATE: Some people have asked whether I’ve taken the increasing world population into account in writing this post. I have. I looked at the UN’s projections as reported on Wikipedia which predict 9.15 Billion people by 2050, or 40 years from now.

My use of the estimate of the proportion if vegans in the world at 1% has also been questioned. I’ve seen that number mentioned in connection with a Gallup poll taken in the US in 2007, but I do not know how accurate it is. But suppose that the actual proportion of vegans is only 0.01%, meaning that I guessed wrong by a factor of 100. Suppose that instead of 67 Million vegans alive in the world today there are really only 670,000. What happens to my vegan world plan them?

Well, if every current vegan can convince just one other person every year to become vegan as well, and if each of those new vegans can do the same, then in 14 years there would be over 10 Billion vegans, more than the entire population of the world.

Anyone who knows me knows that I am a realistic optimist; I am not a starry eyed dreamer. But the point remains. Advocacy for a cause is something that can be effectively done by a small group of committed activists who are intent on helping others make new decisions. We don’t need huge budgets, or high profile campaigns, or celebrity endorsements. If our message is a good one, and if our strategy is sound, and if our
tactics are effective, people won’t resist. Convert a non-vegan, change the world. 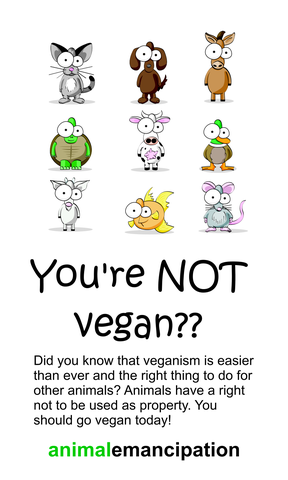