The Namibian government tamper with the actual seal population figures, they inflate their numbers to justify a higher quota. See this link http://tinyurl.com/5rpp7nx The Namibian Government use non existent laws to arrest and detain journalists. This is Zimbabwe style or akin to South Africa under apartheid. See this link http://bit.ly/eAQzaU

The seal clubbers attack and beat foreign journalists who wish to film the cull. See this link http://tinyurl.com/62vujny

The Namibian seal cull is known to be the most violent and brutal cull on earth. See this link http://tinyurl.com/5wfb3we

The Namibian SPCA have the legal power to end the cull. The Animal Protection Act of 1962 states quite clearly that beating an animal to death is an act of cruelty. It gives the SPCA the legislative powers to arrest any individual for doing such. This pic shows a terrified pup trying desperately to hide from men wielding clubs. Its life is worth only $7 and a fur coat sells for as much as $30 000 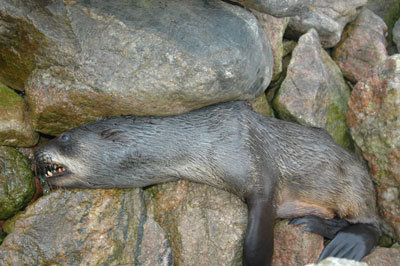 The Namibian SPCA have sent their representatives to the cull sites to witness the clubbing of 85 000 seals. They have concluded that this behaviour is humane. See this link http://tinyurl.com/4b6e2du

According to their lawyers, the SPCA do not have to end the cull or interfere with it. The reason? Because, according to Namibian legal classification, a seal is not an animal.

Will YOU stand up and fight this madness??

We need to make a stand!!! this is shocking!!! please sign petition!!!