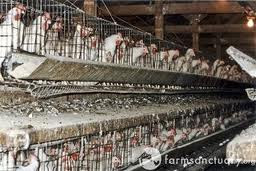 Dr. Karen Davis of United Poultry Concerns appeared on a recent Go Vegan Radio Show (Feb 12th, 2012) to talk about the so-called “rotten egg bill” known as HR 3798. The show is a testament to the naivety of supporters of the messy business of animal welfare who always appear to hope for the best and end up with the worst of scenarios.

In this case, the assumed and claimed “promise” of Proposition 2 – cage-free facilities and the “banning” of the battery cage – has been betrayed and, instead, a system of enriched cages and enriched colonies will be introduced. Karen Davis explained that she herself had given a guarded welcome to Proposition 2 (which should be enacted in 2015) while Bob Linden said he always thought little would come of it.

One of the features that led animal advocates to believe that Proposition 2 – which was entitled “the Prevention of Farm Animal Cruelty Act” – would necessarily result in the provision of cage-free facilities was the stipulation that hens must be able to spread their limbs, turn around, and sit down not touching either other hens or the sides of a cage or enclosure. It turns out, however, that this provision is not intended to apply to all the birds at the same time – rather, it may simply apply to one bird at a time - and they may therefore have to “take turns” to stretch and move. This seemed to shock Davis – the sneakiness of it – although Proposition 2 never actually stated that cages would be banned, it was just assumed that this would be the result.

However, these sorts of claims have been a feature of the claims-making of the battery hen industry in Britain for years. For example, when animal advocates complained that birds in what we now seem to be compelled to call conventional battery cages could not stretch either their wings or legs, industry spokespersons would suggest that they could indeed stretch - one limb at a time, and by adjusting their position inside the cage in order to do so.

This, of course, is the language of the exploiter and the abuser, for it is attempting to justify a totally oppressive system, one which Proposition 2, like all messy welfare measures, is designed to tidy up.
Another feature of Bob Linden's Feb 12th show is his continued opposition to the Humane Society of the United States, which he believes has misled and conned sections of the animal advocacy movement. Linden has made this claim for quite a while now, although there seems to be little substance to it. In fact, he does not help his own position by continuing to falsely call the HSUS an animal rights group, which they certainly are not, and specifically state that they are not.
When I asked Bob about this on FB, he suggested that the HSUS will cosy up to all sorts of animal advocates when it suits them and, often, animal rights supporters have been given the view that the HSUS is a supporter of the philosophy of animal rights. In my view, this simply underlines once more the careless, and deliberate, philosophical mess at the heart of the animal advocacy movement in which virtually anything "for the animals" may be characterised as animal rights. I would dearly love that this would change, and organisations who care nothing of rights, like PeTA for example, would stop using the name.
However, I do not expect the situation will change any time soon - just as I'm sure that animal advocates will continue to involve themselves in the messy business of trying to regulate atrocities in the name of "doing something now" and not being "passive."