Sociologist David Nibert points out that speciesism is an ideology rather than a personal prejudice held by individual members of society. This means that speciesist values are found embedded within all levels of the fabric of society.

A recent example features in the reporting about a cow who was clearly frightened because he was being put through a slaughter system in a "high school meat processing programme."
Using speciesist "it" language, a school spokesperson make it clear that the steer was frightened:

“The steer turned because it got scared and kind of trapped the instructor. When the instructor tried to get away, the steer flipped him. He landed on his head but he was wearing a hard hat.”

By the time TV media gets its grubby hands on the story, however, an animal in fear of his life is transformed into an attacking beast...
PLEASE SEE THE VIDEO HERE 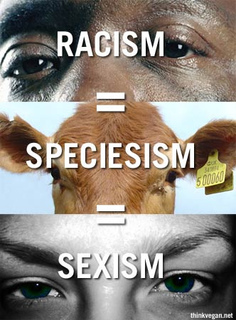 I have lately been reading 'Beloved' by Toni Morrison, the characters being American Negro slaves at the end of the 19th century.  I am struck by the similarities between their stories and those we read in animal rights sites.  Beloved concerns a mother who murders her child rather than surrender it to slave hunters, as the child was born in bondage it belonged to the white owner.  The attitudes towards black people closely resemble that of how animals are regarded today.  Black people were feared just as people fear being injured by animals, and only regarded as far as their economic value and breeding capacity.  As a person who is involved in wildlife rescue I'm not surprised at how this story was reported.  I hope that animal rights will one day be successful as was the anti-slavery movement.