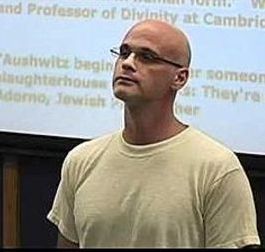 Lecturer, activist and vegan educator, Gary Yourofsky will be taking questions from members in a new ARZone interview.

This event is not an ARZone Live Guest Chat, this is an interview which will be posted in ARZone in due course.

In 1997, Gary liberated 1,542 minks from the Eberts Fur Farm in Blenheim, Ontario. That protest and others like it earn him praise and scorn from people on both sides of the animal rights debate. Despite six arrests, one lawsuit and legal debt, Gary continues to advocate for other animals.

Gary traces his animal advocacy to the early 1990s. His stepfather volunteered as a clown in The Shrine Circus and offered to take him on a tour. Gary said he was shocked to see an elephant chained to a post with scars behind his ears. "I looked into the elephant’s eyes and all I saw was sadness and despair," Gary said. "There is no way to get wild animals to perform except to beat the pride out of them."

In 1996, Gary founded ADAPTT (Animals Deserve Absolute Protection Today and Tomorrow), an ethical vegan organization unequivocally opposed to animal use. ADAPTT is also an unwavering supporter of human rights, and we are seeking an end to discrimination of all kinds (racism, sexism, speciesism and heterosexism).

Gary welcomes the opportunity to take questions from ARZone members, which must be submitted to ARZone no later than Friday 3rd of June via Carolyn@ARZone.net.