Edward Coffin said yesterday was "bittersweet," even though he ended it $15,000 richer.
The city agreed to pay Coffin, an animal-rights activist, that sum as a settlement. He sued the city last year with the help of the state's branch of the American Civil Liberties Union after he was illegally arrested during a supermarket protest in 2009.

"The money is appreciated, but my ultimate goal was to get better First Amendment training for Philadelphia police officers," he said. "I think I've made some progress, but it's still a major problem."

City police officers are not trained on activists' rights and instead are told to refer problems involving them to the department's Civil Affairs Bureau, according to the complaint filed in the lawsuit.

"I felt extremely violated that I was arrested for handing out leaflets, a First Amendment activity," Coffin said. "I was afraid cases like mine would have a chilling effect and convince other protesters that it's not worth it." 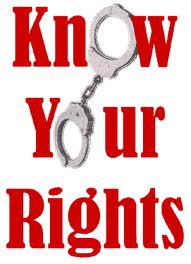 Tim, this is very scary. The 8th commenter had it right on the button. It's strictly intimidation tactics, to scare everyone else off. I feel bad for you guys living under the oppressive regime that you have in the USA.

There is quite a bit of coverage on this, this is a short article that I thought was interesting too:

On Dec. 23, 2009, Ed Coffin was passing out animal-rights leaflets in front of the Whole Foods on South Street — to tell people, he explains to City Paper, "that 'humane' slaughter is an oxymoron." While he was certainly annoying, at least to the management, he wasn't doing anything illegal — and yet he was shooed away by the supermarket, scolded by police and eventually arrested and held for two hours.

The American Civil Liberties Union (ACLU) filed suit. Instead of facing the issue in court, the City of Philadelphia is paying Coffin $15,000 to go away.

This is nothing new. The ACLU alleges Philadelphia police frequently make illegal arrests at protests, and claims officers are not provided with First Amendment training. Which is why the ACLU filed suit, and the city ended up making Coffin an offer he couldn't refuse.

"It's basically the city's way to shut down the conversation," says ACLU attorney Mary Catherine Roper. Neither the city nor Whole Foods responded to requests for comment.

"They may be happy to pay $15,000 every time we file a case to make this go away," says Roper. "But it's not going away because police officers keep doing it."