Just watched Blood Dolphins..... and am more determined than ever NEVER TO GIVE UP!

A recent conversation with my five year old grandson went something like this:

“How is that possible?”

“Your father is trying but finds it difficult…

A TV series picked up by Planet Green a Discovery channel company... will be airing what they call $Blood Dolphins

A CALL TO ACTION! TAIJII JAPAN DOLPHINS NEED OUR HELP! 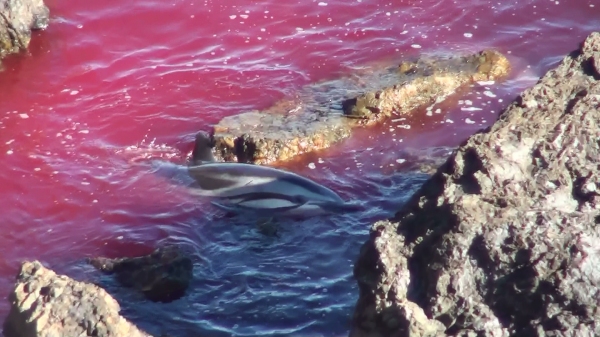 Before I begin to attempt my explanation of what happened today, I have a call to action to every single person reading this now.

The following is a series of videos posted on YouTube. It depicts a panel discussion on animals used in research and education that occurred on April 21, 2010, 7:00 p.m. at the University of Toronto, Hart House, Music Room. Featured is an introduction by graduate student PaulYork, and three panel contributions with Q & A to… Continue


Published on his blog on January 8,…

For many years now, I have been arguing that the large animal protection groups are, for the most part, partners with institutional exploiters and are, in effect, lobbying arms of the food industry. They do not challenge animal…

What? Peaceful vigil, banner holding, and leafletting to public in front on consulate in support of Worldwide Day of Action

Why? As concerned individuals around the world we are calling on Japan to stop the slaughter of dolphins and instead call for a sanctuary or ecotourism area to be set… Continue

Thinking Critically About The Animals We Use


In a new blog post, Mary Martin, PhD links to a new…

Stop Live Exports - Donations of Prizes needed - Can you help?

Can you help us by donating a prize or voucher for our 2011 fundraising activities?

To support our campaign initiatives, we are holding a raffle in March, and a quiz night in July this year.  If you can donate any items towards either of these fundraisers, it would be much…
Continue

DON'T USE OR EAT PALM OIL, IT KILLS THE ORANG UTANS!

Are you aware that palm oil is found everywhere, in such things as biscuits and soap, and thousands of products some of you probably eat, thinking it's OK as it's not an animal product.....

but in my opinion, vegans should never eat or use any product containing palm oil, as palm trees are grown on deforested land, and that land is the territory of the orang utans, who are killed for palm poil production. I personally always…

Backfire: the movement’s mistakes have failed…

Today I have been looking through various AR groups on fb etc and see they all have a similar thread. Disagreement!
I do believe that debate is healthy but talking never saved a single life. In the time it takes to argue your point, you could have signed ten petitions, made phone calls, wrote to some ARPs.
I hope that 2011 brings some real harmony amongst the groups and that the larger organizations can start working together more and that as a movement, we can come together, draw up… Continue

Today I feel excited.......I feel excited by the possibilities and opportunities that AR zone offers to our movement.
One of our greatest problems is that there are millions of "animal" groups around the world and our message and resources are stretched to their limit. ARA's argue with ARA's, Vegans argue with vegetarians etc but our core beliefs are the same.
As a movement, we must come together, fight together, put our human differences aside and bring about change. I feel excited… Continue

Hello there! If you are new here, you might want to subscribe to the RSS feed for updates on this topic.