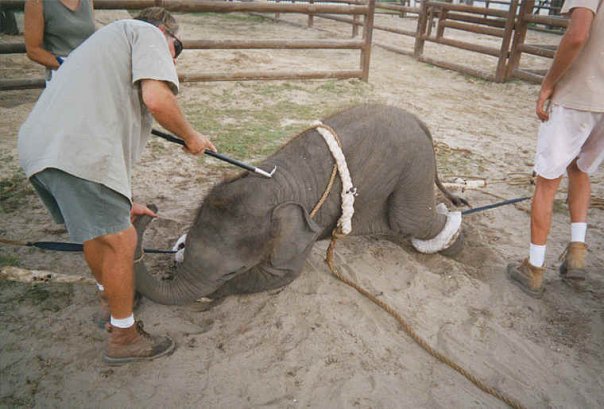 This ruling was not based on the lengthy record of indisputable cruelty to baby elephants, some of whom died during abusive training, or the cruelty to adult elephants who are beaten with bullhooks—the equivalent of a fireplace poker—time and time again.

The judge's decision was based solely on the ruling that the animal protection organizations and the former circus trainer involved in the suit do not have legal standing to raise these issues.

Evidence presented at trial and in PETA exposés makes it clear that bullhooks and chains cause elephants enormous pain and suffering.

In the summer of 2009, PETA released video taken during an undercover investigation documenting that numerous Ringling trainers struck elephants with bullhooks backstage at circus shows. In December, we released shocking photographs taken by a Ringling trainer of baby elephants, bound with ropes, being threatened and gouged with bullhooks. Bullhooks have only one purpose—to inflict pain. The sharp metal hook bruises, punctures, and tears elephants' sensitive skin easily and often. Please urge the USDA to end the use of these barbaric tools.

Some of the internal documents presented during the trial highlighted that Ringling's own vet techs witnessed several abuses, including the following:
An elephant was dripping blood all over an arena floor after being hooked on the trunk and leg.

A trainer was seen using an electric prod while elephants were unloaded.
On four elephants, multiple bleeding lacerations caused by a bullhook were covered with a gray powder called Wonder Dust just before a show.

Inspections, medical records, and other documents revealed the following:
Dozens of elephants with Ringling have been placed under tuberculosis-related quarantine.

Elephants exhibited lameness, which was exacerbated by grueling performances, and a 2-year-old elephant suffered from foot abscesses and lameness.

Water was withheld from elephants so that trainers could minimize urination, and the water that was provided was sometimes contaminated with soap or bleach.

Experts who have testified on PETA's behalf in support of legislation to ban the use of bullhooks and chains on elephants also testified at the trial.

A PETA video of Ringling substantiates what witnesses and records revealed regarding the abusive use of bullhooks. Feld Entertainment CEO Kenneth Feld admitted in court that he's seen handlers hit elephants under the chin, behind the ears, or on the legs with a bullhook.

On the heels of the judge's decision, we must urge the USDA to end the use of bullhooks and chains on elephants. 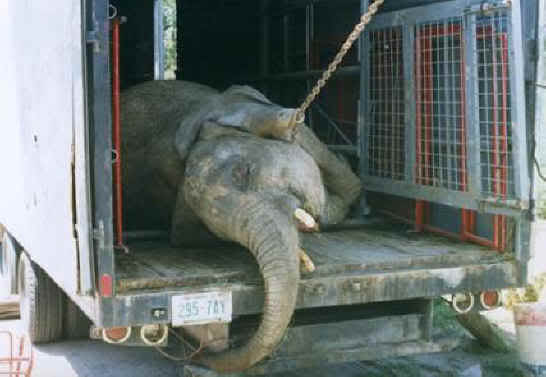