The New Zealand Jewish community is preparing a legal case to challenge a ban on the kosher slaughter of animals.

New Zealand Agriculture Minister David Carter has taken a strong stand against non stun slaughter methods. It was David Carter himself who went against the advice of his advisors and implemented the NZ ban on this type of slaughter in May 2010.

This NZ animal welfare code requires all animals to be stunned before commercial slaughter. That goes against the shechita, or kosher slaughter, requirement allowed under previous animal welfare rules, which involves the animal's throat being slit without stunning.

Wellington Jewish Council chairman David Zwartz says the ban means meat processed according to Jewish religious laws now has to be imported from Australia and that lawyers are preparing a case to have the slaughter restriction reversed!

Clearly NZ Minister David Carter is under a lot of pressure to remove his decision, the outcome of which could set a precedent to other agricultural ministers around the world and impact on efforts to have stunning more broadly accepted in the Middle East or other countries that practice this cruel method. We could not send a more dreadful message to regions that desperately need to be awakened to the need for change!

I am aware that Australian agricultural ministers are preparing for a meeting in November to discuss the future of this kind of ritual slaughter in Aus.

There is not as yet any information about the proposed court case, in the meantime we can write to the minister of agriculture, David Carter asking him to continue to support the ban on this practice in New Zealand. He needs our support to stick to his guns!!

You can e-mail him on d.carter@ministers.govt.nz

Please let us know if you get a response or any more information related to this case!

Permalink Reply by blackpanther on August 1, 2010 at 7:02
I thought it was a courageous decision taken in New zealand, they must not remove this excellent decision!
In France too, we are trying to stop those unbearable sufferings, here are a few pictures of the death of a non stunned cow in a slaughterhouse...... 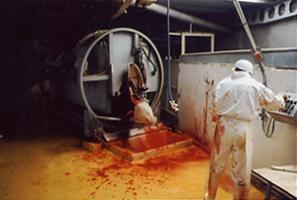 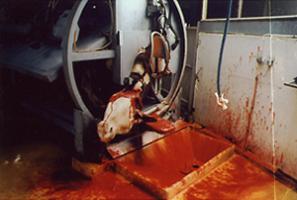 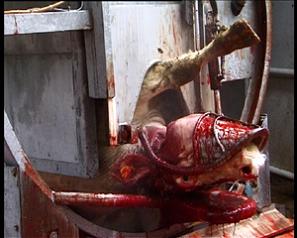 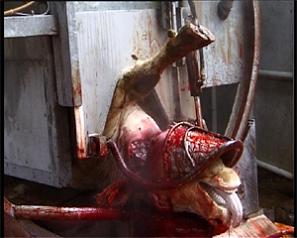 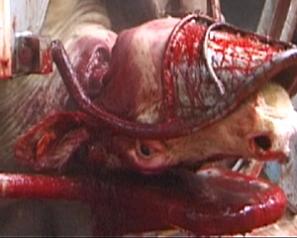 Permalink Reply by Caroline Raward on August 5, 2010 at 19:45
Thanks so much for those pics black panther, they speak a thousand words and i have used them to try and get people onboard for this issue. Its a hard one cos its a welfare issue, but I think it is really important that it is stopped!!

I found that article on care2:


A couple of months ago I wrote about the tension in New Zealand between the Orthodox Jewish Community and the Agricultural Ministry.

Two months ago the NZ Agricultural Minister, David Carter, issued new standards for the slaughtering of livestock for food. The new rules would mandate that animals slaughtered be stunned before being killed.

Usually this stunning is done by a device called a captive bolt gun that fires a metal cylinder into the skull of a cow so she is rendered relatively senseless and semi-unconscious before she has her throat cut.

The problem is that the Jewish religious practice of slaughtering animals, called "shechita" mandates that an animal be bled out by its throat without being stunned first. The new agricultural laws de facto outlaw Kosher slaughter, a move that has been condemned by the Jewish community in New Zealand.

There doesn't seem to be any room for compromise between the Agricultural Ministry and the Jewish community and so the two groups have entered into a legal battle that will not be settled until next year. An agreement was reached this week, however, to temporarily allow shechita until the trial permanently decides the fate of Kosher slaughter in New Zealand.

I've had two months to mull this issue over in my head, whether it was worth it to stifle the practices of a religious group to solidify a government regulation that doesn't reduce the number of animals being slaughtered, but simply defines how they are slaughtered. I'm a vegan and I don't believe in killing animals for any reason by any methods, and so it seemed pointless to insult a religious group over an animal welfare compromise that's pretty meaningless at the end of the day.

Over time I have considered a lot of things. One being the fact that I abhor some methods of human execution more than others, even though I am absolutely opposed to the death penalty regardless of offense or implementation.

I considered the fact the death penalty is illegal in New Zealand so there was no way to compare rules for killing humans to those for killing animals. But I also considered that the New Zealand Bill of Rights bans "cruel, degrading, or disproportionately severe treatment or punishment" and wondered if that shouldn't also apply to non-human animals.

This is a situation where I feel forced to make an uncomfortable compromise and say that even though I don't believe that some methods of slaughter are better than others, I can't turn a blind eye to the extra unnecessary suffering of animals that are conscious while they are being bled to death and dismembered.

I don't support government attempts to disrupt the practice of spiritual beliefs that are important to any community, but there are always going to be situations wherein a spiritual community and a governmental body can't both enforce their respective laws completely. In those situations I will always side with whatever group is looking out for the safety and health of human and non-human animals. In this situation the Agriculture Ministry is clearly the lesser of two evils.

The Jewish community doesn't have to eat meat any more than any other religious or social group has to eat meat, and so if meat cannot be prepared in a way that is acceptable to their dietary requirements, they can embrace a compassionate lifestyle and eliminate animal products from their diet entirely."

Where did you get those pics from? are there anymore where they came from? they have been very useful!
There are a couple of notes circulating around facebook New Zealand SPCA has not, as of yet, commented on this horrific miscarriage of justice. We are trying to ask them to make a public statement condemning this decision.
president@rnzspca.org.nz
AND ceo@rnz...

Also this is the main part of the note currently circulating. .


I am writing to express my horror and disappointment after learning that the New Zealand Government is once again allowing cruel religious slaughter to be carried out, only months after it banned the obscenely cruel, and unspeakable Kosher slaughter practice.


Many progressive countries have lowered the bar on what is acceptable in civilised society to appease these extreme religious views, and New Zealand is now one of these countries.


Clearly the New Zealand Government believed Kosher slaughter to be sufficiently cruel to impose the ban; what scientific, peer-reviewed evidence has been provided indicating that it is suddenly not cruel to cut the throat of a fully conscious, terrified animal?

New Zealand had an opportunity to truly lead the way by banning a slaughter practice that is simply brutal. New Zealand's decision to overturn a ban on Kosher slaughter will now discourage other countries such as Australia from banning religious slaughter. Instead of the New Zealand Government leading the way in animal welfare it has now set a strong precedent to regions around the world that cruel slaughter practices are acceptable.

To deny the very animals that sustain us even the small amount of relief that stunning gives before the moment of death, is truly indefensible! We must have laws that everybody adhere to regardless of religion. How can one religion be exempted from the laws of the land but not another? The same laws should apply equally to all citizens and those laws should be evidence based and adhere to the highest ethical standards.

New Zealand has now sent a message worldwide, and that message is that animal cruelty is ok if it pleases certain religious groups. Laws designed to protect those who cannot protect themselves, including animals, should not be granted except in the most exceptional of circumstances, and religion is certainly not one of those circumstances.

I shall not be buying New Zealand exports in any way, shape or form and shall encourage others to do the same.

HERE ARE THEIR EMAIL ADDRESSES: