Use a rice cooker! I'm serious. I was in a hurry, and decided to just try it out to see what happens. I used 6 "cups" of the millet & quinoa (50-50 mix), and filled the water to the 8 cup line, just as if I were making brown rice. I hit start on the regular white rice cycle, and let it go. At the end of the cycle, the rice pot beeped, and I had perfectly steamed millet and quinoa, cooked at the same time. They were cooked to perfection, and not sticky at all.

I find that if I make quinoa or millet by itself, they don't cook up as nicely. The quinoa tends to the overcooked stage, with the little swirly thingies falling out. The millet tends to the mushy, and sticky as heck side, with the whole thing becoming a globby mass. No thanks! From now on, I shall cook it in the rice cooker, and wind up with fluffy, tender, perfectly done millet and quinoa. From there, it's easy enough to use the grains just like you'd use rice.
If you don't have a fancy rice cooker with all kind of cycles, fret not! I did it with the rice cooker at work (which just has an on and an off button), and it came out perfectly there too. I just did the same measurement: 6 "cups" (and by "cups", I mean for you to use the measuring cup that came with the rice cooker; if you lost it, 1 "cup" is equal to 3/4 cups by dry measure, so do the conversions as necessary) of millet & quinoa, with enough water filled to the 8 cup line. If you have a larger cooker, I'm sure you could do 8 "cups" with water filled to the 10 cup line with similar results, but I'd suggest you don't experiment with this one. I know it may be tempting, but I've tested this out a few times, and it's always worked out with this ratio.
Alternative Vegan
http://altveg.blogspot.com 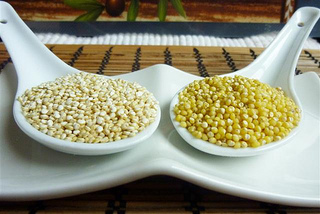 The Second Edition of Alternative Vegan may be purchased here: