More than 400 dogs were rescued from Yulin Dog Meat Festival in June 2013. 2 different groups purchased dogs from the trafficker, Du Yufeng was one of the groups with the monks who helped her. The priority was to save as many dogs as possible because a lot of the dogs were sick with distemper and other illness. Many died after arriving at Shangrao farm. Some died at the vet hospital. 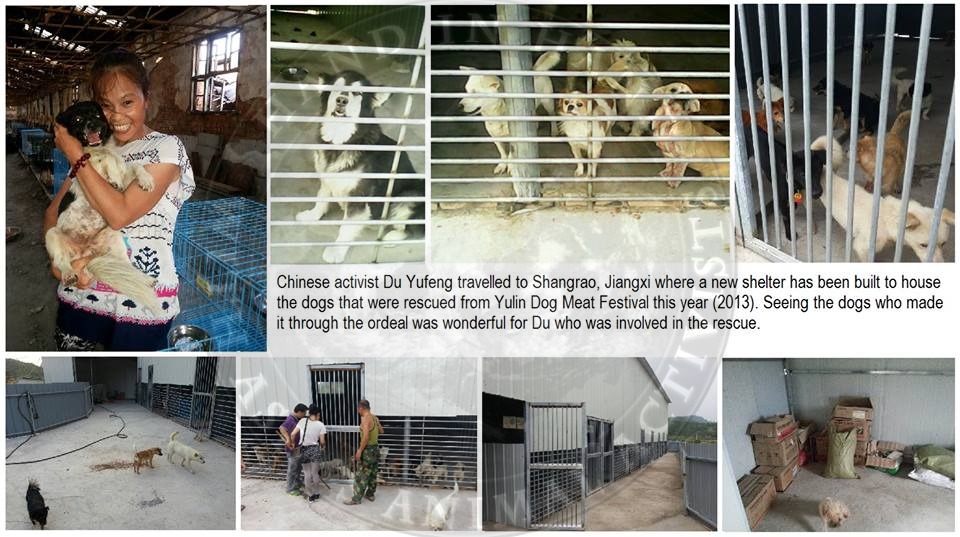 The situation was not all bleak though - some healthy dogs were adopted with the new owners promising to desex their adopted dogs. At the end, out of 400 dogs, over 100 survived (including those adopted) and about 70 live at the new shelter in Shangrao. Now that the situation has calmed down and the dogs will illness are healthy, these dogs will be desexed before being released to their new owners. Because there is no record of who owns which dogs (only the records of the number of dogs rescued), Du will leave "her dogs" at Sangrao for adoption while waiting for her own new shelter to be built. If after the completion of her new shelter in Guangyuan there are still some dogs left at Shangrao, she will discuss with the shelter about the number of dogs she will take. The dogs that died did so with love and care instead of at the hands of the evil butchers and the volunteers spent the time and money with their best efforts.
Photos and translation by NT.