The Animal Rights Zone podcasts are the result of global Skype recordings by people located in Australia, North America, Canada and Ireland. Therefore, please excuse some slight volume problems and other technical glitches in some sections. 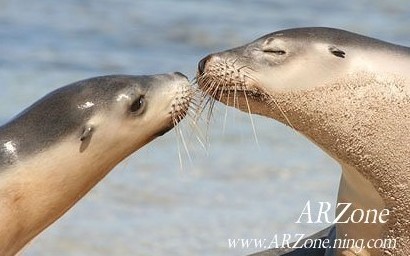 ARZone exists to promote rational discussion about our relations with other animals and about issues within the animal advocacy movement. Please continue the debate after a chat by starting a forum discussion or by making a point under a transcript.

You all sound great together!  I agree, Sharron, that a podcast is a much more personal approach.  Furthermore, this really made me reflect on animal advocacy in general.

In regards to what I think was the primary issue of this podcast, and that is questioning if we can justify supporting welfare reform that would marginally improve an animal's life:

I think we are overlooking a key aspect here, (this is something that is explored exstensively on the humanemyth website) and that is the subjectivity of pain and suffering in general.  We know that humans and other animals feel pain and can suffer mentally, but what we cannot be certain of, because at this time we cannot currently measure it, is the various DEGREES of said pain and suffering that are experienced by respective individuals.

I hopefully will not have to convince anyone here that like humans, other animals are clearly individuals which have their own preferences, attitudes, and more to the point, tolerances to pain.   For other animals, this is most evident in the fact that they boast a wide range of sensory abilities and sensitivies.  One animal might suffer more from what she hears than what she sees.  Another may be far more sensitive to scents than touch.  This makes it EXTREMELY difficult to determine whether any given animal will MEANINGFULLY benefit from welfare reforms short of abolishing factory farming altogether.  I say this because of the inherently exploitive and intensive nature of factory farming.

Let's say we were to abolish the practice of debeaking hens and a more er... "gracious" alternative was implemented.  Is it really reasonable to suggest that this makes any meaningful difference to a chicken who must also deal with horrendous housing, feed, transportation, slipping slowly into psychosis, being slaughtered while fully concious (in most places anyway), etc. etc.   How in the world could we accurately determine such a thing?

I suppose you could then make the argument that we are capable of finding more "gracious" alternatives to all of those things listed above and still maintain factory farming, but I have no idea, LITERALLY no idea, what those would be.  Again, I would support abolishing factory farming because this would make an, indeed, meaningful difference to an animal's life even when we do consider the subjective nature of pain and suffering.  However, it seems that this particular stage of the movement is awfully far away.  Could we implement incremental change in a way that would abolish factory farming and finally animal use altogether?  I'm not sure.  It seems we will always need factory farming as long as the demand for animal products is so high.

And this brings us back to what Roger was talking about.  The more ethical vegans we have the better.

On the other hand, when it comes to focusing on making more vegans, we certainly have a good idea of what the results will be.  Of course, we are not even close, at this time, to having enough to make any serious change, but it has to start somewhere.  Once we have enough vegans we will significantly be able to affect the strained relationship between humans and other animals.  Such a severe reduction in demand for animal products can only be seen as a good thing.

I understand Tim's concerns about what vegan education is exactly.  Who knows what will work for any given individual?  However, some transitions do seem more reasonable than others.  It is understandable how someone could connect their grief from their dead companion animal to other animals in general, and might possibly become vegan.  It makes... less sense that someone who merely witnessed a welfarist campagin supporting "free-range" or "cage-free" eggs would land on veganism, although I can't say I'm sure it hasn't happened before.  I say this because the first example involves seeing an animal as a person while the latter can easily reinforce the property status of that animal.  Really though, I'm willing to try almost anything.

I don't believe in the zero-sum game either.  All I want to focus on is what makes sense.  What has the best chance at getting the job done?  I will continue to educate myself and evolve constantly in order to see that I eventually realise what it is.

I LOVE it. I absolutely love this podcast. I felt a part of it. So much more personal. It is a nice feeling to actually listen / hear the voice of you guys that I have had a cyber connection with for a while. As this is number one I am assuming there will be a number 2. Please make it soon.

Now having said that....I am so confused listening to the conversation about the Live Exports to Indonesia. I am confused as to which way to turn.  I have made the decision to participate in the protest in Sydney on Saturday. During the podcast I went from changing my mind about attending to standing firm on my decision.

I want abolition, I believe in the absolute rights of other animals but the world isn't going vegan on Saturday.  What I can be sure of is that 'cattle' will be sent to Indonesia to endure conditions so deplorable & so horrendous if we don't make a noise on their behalf.  We need to speak for those innocent beings.  I am clear that these guys will then be killed / murdered here but I have to put myself in the mind of the animals & ask myself whether I would want that bullet straight to my head (believing that slaughter in Australia is 'better' than Indonesia) or if I want to be tortured & brutalised leading up to my slaughter.  This is gut wrenching stuff that is happening & vegan education isn't going to save these guys. As much as some welfare measures, if not all, are distasteful to me, I have to advocate this weekend for bigger cages not empty ones