Former Kuala Lumpur City Hall (DBKL) employee V. Ganeson’s heart breaks every time he sees dogs being caught and taken to government pounds.“I know what happens to them there and that is one of the reasons I quit my job in DBKL three years short of retirement,” said Ganeson, 58.
It is also one of the reasons that Ganesan started his shelter eight years ago and takes care of about 200 dogs, which are currently kept in Seremban and Brickfields.Ganeson, who was a gardener with DBKL, narrated how he used to visit the pound almost daily after work to try to rescue as many dogs as he could.“I used to bring out puppies and ‘mother dogs’ out of the pound so that they would be spared euthanasia.”
According to Ganeson, the memory of dogs being dragged out of the dog catchers’ van into the pound for eventual euthanasia still remains fresh in his memory.“The dogs whine and howl when being dragged out and they struggle to stay alive until the last moment when they are being euthanised,” said Ganeson.Ganeson added that when he was transferred to the dog catching unit, he immediately resigned from DBKL even if it meant losing his pension.“I would rather starve and be without a job than do that job,” said Ganeson. 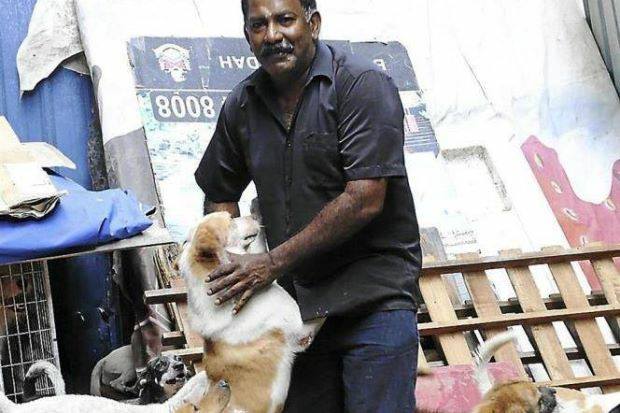 Currently, DBKL has given Ganeson a grace period to move his dogs from his temporary shelter in Brickfields and a group of Good Samaritans has set-up a society for him and are building a proper shelter in Kuala Selangor.Named the Lost Animal Souls Shelter (LASS), the organisation is building the shelter to house all his 200 dogs that have to be moved to a new location by December.“I am thankful there is someone genuinely helping me now as I have minimum education and have some limitations because of this,” said Ganeson.He added that there have been occasions he had been duped of donations by certain quarters pretending to help him.LASS president Vignes Chelliah, 56, said she decided to gather her friends and help Ganeson as she was moved by the sacrifices he had made.
“We knew he needed help and we initiated LASS and are in the process of doing up the shelter but we do need public support to get the project off the ground,” she added.
They estimated that about RM200,000 was needed for the project and had managed to raise about RM50,000 so far.
For more details, please call Vignes at 016-311 9637 or visit the facebook page:-
https://m.facebook.com/pages/Lost-Animal-Souls-Shelter/317794128326...