Some people, such as David Sztybel and representatives of the National Animal Interest Alliance, argue that there are several versions on animal welfarism. In this blog, I tend to talk about two types, which I have called traditional (or conventional or orthodox) animal welfare and neo- (or new) animal welfare.

I tend to think of the former (traditional) as animal welfarists who want to regulate the use of other animals in the main and do not want to end it. Organisationally, I mean groups such as the RSPCA and the HSUS. However, these groups will claim that they do want to abolish some forms of other animal use. For example, this RSPCA animation talks about (well, booms really, since Brian Blessed did the voice-over) the banning of fur farming in Britain, the banning of hunting with dogs, the banning of cosmetic testing, the banning of veal crates, the banning of conventional battery cages, the banning of the use of drift nets in “EU waters,” the banning of sow stalls, and the banning the import of “wild birds.” Historically, the RSPCA was involved in campaigns that led to the abolition of lower class “sports” such as bear baiting, bull baiting, and cock fighting. On this theme, the HSUS would likely point to their campaign to totally end horse slaughter.
Of course, such bans have their limitations, and none aimed to end other animal use as a general matter. For example, post-“ban,” hunting still goes on in England, Scotland and Wales; calves are still “farmed” in “group housing,” and conventional battery cages are to be replaced by “enriched” battery cages. Even many bans, in other words, are part of the general idea to regulate the use of other animals. According to the lead organisations in the campaign, the British hunting ban was never meant to stop the killing of foxes, just as the other bans were never meant to prevent “animal farming” or vivisection.
Neo-welfare organisations, in my view, are groups such as PeTA and Animal Aid. Both of these groups suggest that they are animal rights organisations, although they do not show much evidence of adhering to the philosophy of animal rights, by which I mean the reasoned theories on human-nonhuman relations laid out by rights-based thinkers. Animal Aid are much better than PeTA on this, as the latter deliberately distort the meaning of animal rights. Animal Aid’s online bookstore, for example, is far superior to PeTA’s. It does, for example, feature texts by Gary Francione, Andrew Linzey, and Joan Dunayer. The absence of Tom Regan is a real shame but I think Animal Aid have sold The Case for Animal Rights, Defending Animal Rights, andEmpty Cages in the past. PeTA will not go near these rights-based writers with a barge pole, preferring to sell the work of Peter Singer only and, moreover, lying about it being an animal rights philosophy text.
A few weeks ago, an AR2011 video was released featuring Alex Hershaft of Farm Animal Rights Movement (FARM) and Bruce Friedrich, late of PeTA, now earning a crust from Farm Sanctuary. Hershaft made the case for abolition while Friedrich presented the classic new welfarist view, as conceptualised by Gary Francione, arguing that animal welfare reforms both reduce animal suffering and can act as stepping stones to animal liberation.
Acting much like a salesperson for the user industries, Bruce Friedrich showed the audience slides of conventional confinement systems and newer “humane” conditions. I was struck by how clean and shiny the newer exploitation facilities were compared to the dirty, broken down, old ones, reminding me that the HSUS also specialise in publishing such images on their web site: clean, bright, and new = humane, versus dirty, dingy, and old = cruel. It seems that the user industries along with Farm Sanctuary and the HSUS have vested interests in presenting this stark contrast. However, it is rather misleading to say the least. 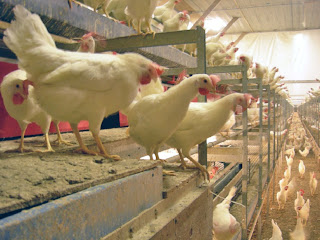 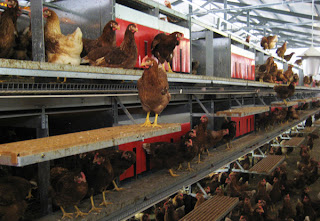 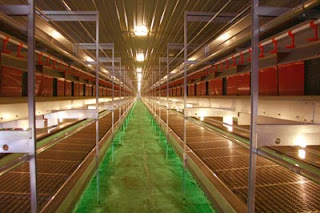 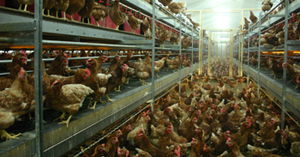 Essentially, this formulation of the new is similar to the presentation of a crude Weberian ideal type, a concept – an abstracting tool - used in sociology. At its most basic, this involves the construction of a perfect or ideal example, one which is never to be found in the “real world,” and placing what is found in the world next to it. The aim is to gain some understanding of the “gap” between the two. In foundational sociology classes, I would give the example of the construction of an ideal football (soccer) team. It is fairly easy to think of what the perfect football team would look like, what the manager would be like, how good the players would be in their different positions, how big the ideal squad would be, even how good the backroom staff and player’s facilities would need to be. No real team would match up to the constructed one in which everything is “just right” in every detail.
I think animal welfarists consistently make this sort of error when they compare the horrible old to the “much better” new. The pictures of new use facilities don’t look “too bad” if and when the places are empty or “just stocked,” as they seem to be in the favoured photographs. However, give it a few months, a couple of years certainly, and then see the conditions, as perhaps revealed by an open rescue, in circumstances when the user industries and animal welfare organisations cannot stage manage everything. Then, the pictures will reveal the terrible realities: the filth, they’ll give some idea of the stench,[1] the amount of “deads,” and the number of those soon to die.
It seems to me that animal advocates who are more often than not pessimistic about abolition are very often far too optimistic about welfare improvements. They rarely seem to give much thought to the actual day-to-day running of these “improved” units.
Not only will the conditions rapidly deteriorate from those shown in the publicity shots, there is the brutal truth that new facilities will still be operated by speciesists who give little thought to the interests of other animals apart from considerations connected to the economics of exploiting them. Add to that the fact that measures supposed to regulate use are themselves poorly regulated. For example, there have been a number of exposes of the RSPCA’s “Freedom Foods” scheme which exists to endure strict welfare standards. I doubt if it will take long before someone provides footage of the realities behind PeTA’s agreement with KFC to gas chickens, and the HSUS’ deal with the US egg business to phase in “enriched” battery cages (once both their lengthy phase-in periods are over), something even Compassion In World Farming are worried about. Bruce Friedrich made great play of the part of the HSUS-egg industry agreement that is designed to end forced moulting within a year. Who will monitor if that is the case? Who will be there to monitor what goes on in those massive sheds, often located well off the beaten track? These sorts of agreements often pay lip service to notions of “high quality stockmanship,” but is any of that worth the paper it is written on with no-one to monitor the system?
There have been some defence of animal welfare reforms on Animal Rights Zone (ARZone) lately. I get the impression that much of this defence is defence of the ideal – the on-the-face-of-it idea. I think animal welfare reform supporters need to look rather deeper at the actual operation of exploitative use systems – and look beyond the sales pamphlets, photographs and glossy presentations.
[1] I have been in plenty of intensive farming units and the smell and the heat – and often the noise - is almost unbearable.
http://human-nonhuman.blogspot.com/2011/09/when-animal-welfare-refo...