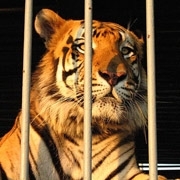 Tony Tiger has not received any gifts yet


Tony is a 10 year old Siberian/Bengal tiger used as a roadside attraction at Tiger Truck Stop in Grosse Tete Louisiana. Tony is another example of how serious the problem is of private ownership of tigers in the United States where there are more privately owned tigers then there are left in the wild.

Tony’s owner, Michael Sandlin, has bought, sold, bred, and exhibited tigers for over 20 years. In 2003, because of violations and fines, Mr. Sandlin and the USDA made an agreement where 3 of the 4 tigers he owned, Toby, Khan and Rainbow, were sent to Tiger Haven in Kingston TN. The USDA reduced the fines and allowed Mr. Sandlin to keep one tiger, Tony.

The Louisiana legislature passed Act 715 in 2006 which prohibited the ownership and sale of large exotic cats, including tigers in Louisiana.

Those individuals who legally owned big cats as of August 15, 2006 were grandfathered in under this act. These owners would need to apply for an annual permit from the Louisiana Department of Wildlife and Fisheries and adhere to additional restrictions and stipulations.

On July 20, 2007 The Louisiana Dept. of Wildlife and Fisheries wrote to Michael Sandlin informing him of the new state rules. He was given an application to fill out and submit and was told Tony would be grandfathered in if the permit was issued.

The Louisiana Department of Wildlife and Fisheries wrote Michael Sandlin on October 22, 2008 advising him that his application had been placed on hold based upon their discovery of the 1993 Iberville ban. Part of their new rules (LAC 76: V. 115. H.13) require that the facility be in compliance with all local ordinances. It was discovered that the 1993 Iberville Parish ordinance prohibited ownership and display of exotic animals such as tigers, but the ordinance was never enforced.

Because he was not in compliance with the 1993 Iberville ordinance ban on displaying wild animals, Mr. Sandlin was issued a citation form the LDW&F on November 17, 2008 and given 30 days to find a home for Tony outside the state of Louisiana. Mr. Sandlin was given until December 16, 2008 to relocate Tony.

Big Cat Rescue, a non-profit educational accredited big cat sanctuary in Tampa Florida wrote to Mr. Sandlin on November 22, 2008 and offered to take Tony and provide a permanent home for him at no cost to Mr. Sandlin. Big Cat Rescue’s offer went unanswered and they contacted Maria Davidson, Large Carnivore Project Manager at the LDW&F and offered their assistance to seize Tony.

The issue of what to do with the tiger was not on the council’s agenda, but members agreed to let one representative from each delegation have three minutes to state their cases.

A court hearing that had been set for Dec. 29 was postponed to allow the council time to consider amending a 1993 parish ordinance that bars private individuals from exhibiting dangerous, wild animals such as tigers

Iberville Parish President J. Mitchell Ourso Jr. vetoed a parish ordinance the council approved on February 17, 2009 to allow a Mr. Sandlin to continue keeping a tiger at his place of business. In his veto message, Ourso wrote that the ordinance the council passed by a vote of 11-1 was deficient because it failed to provide “for permitting conditions to ensure the safety of the general public and the health and welfare of the tiger.”

The Iberville Parish Council voted Tuesday (March 17) to allow Tony the Tiger to stay at the Tiger Truck Stop in Grosse Tete, but only if an upgrade of his habitat will be made.

Mr. Sandlin then had to obtain a permit from the Louisiana Department of Wildlife and Fisheries. A statement from the LDW&F large carnivore manager Maria Davidson read: ”It is the Department’s position that private possession of tigers poses a significant hazard to public safety and is detrimental to the health of the animal. Prolonged confinement is by its nature stressful to tigers and proper long-term care by experienced persons is essential to the health of the animal.”

Contrary to this statement, on December 14, 2009, the LDW&F granted the permit to Mr. Sandlin which allows him to keep Tony on display 24 hours a day, 7 days a week at the truck stop.

July 2010 marked Tony’s tenth year of life as well as ten years at the truck stop. A captive tiger’s lifespan with the proper medical care, diet, habitat and enrichment is 15 to 20 years. Tony lives amid the noise and fumes of car and trucks continually, and his primary dwelling is a concrete and steel enclosure. He has no opportunity to run, swim and receives no enrichment. His health, safety, welfare and quality of life are of great concern to many people all over the world. Accredited big cat sanctuaries stand ready to provide a permanent home for Tony. The Free Tony The Tiger Campaign is committed to relocating Tony to such a sanctuary so he may live the rest of his years in peace and with the care and respect this magnificent cat deserves.

Tony's Petition Update and Thank You

Tony’s “Petition Blitz” for World Animal Day was posted on Saturday October 2nd at about 3:00 am and signatures on his petition were a little over 4,700. We asked if we could reach the half-way point of 5,000 by the end of World Animal Day and we hit it a day before on Sunday. Tony’s petition now has 5,276 names and is even listed as one of the top animal petitions…

Big Cat Rescue of Tampa FL just uploaded a new video they made for Tony. Please also watch the video on Youtube, leave comments and share it.

It’s important to bring Tony’s story to more people and gain their support so Tony’s owner, the LDW&F and Iberville Parish know this blatant display of…

Animal rights activist Anthony Marr talks to onlookers Monday in front of the cage at Tiger Truck Stop in Grosse Tete where Tony, a 550-pound Siberian-Bengal tiger lives. Marr said hopes to raise awareness about the tiger’s condition so the animal can be placed in a sanctuary.

World Animal Day is a special day to commemorate the respect and love we have for animals and also to bring attention to the importance of animals in the world. It began in 1931 in Florence at a convention of ecologists as a means to highlight endangered species. Since then it has developed to include all…