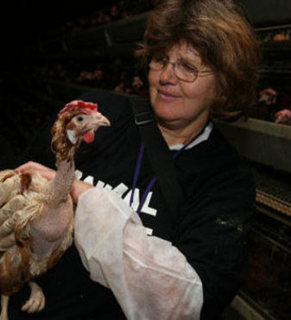 Animal Rights Zone is pleased to announce that Patty Mark, founder of Animal Liberation Victoria in Australia, vegan, and advocate for other animals for more than 30 years, will be taking questions from members in a new ARZone interview.

Patty Mark has long been at the forefront of the Australian animal rights scene. In addition to founding Animal Liberation Victoria, the highly regarded Australian abolitionist animal rights organisation, Patty is also widely credited with creating the concept and practice of Open Rescue.

Originally from the United States, Patty left there in 1973 and traveled the world. It was during that journey that she began to think about helping to erase the line that humans draw to separate themselves from other animals.

After reading a book on animal liberation in 1978, Patty put up a notice that said “Help the Hens” in the local milk bar. That notice attracted 17 people and proved to be the start of Animal Liberation Victoria (ALV). Over more than 3 decades, Patty and ALV have regularly documented (with video footage and photographs) the conditions for animals in factory farms, feedlots, live export and abattoirs and worked to educate the public on all the issues surrounding animal rights. In 1980, Patty began Action Magazine as founding editor.

In 1999, at a conference in the United States, Patty presented the positive results from ALV’s Open Rescue actions in Australia. By comparing videos of an open rescue action with a clandestine action, she managed to convince a number of people of the many benefits of open rescue, especially on the grounds of compassion for other animals as well as the positive reception from the general public. Soon after, other organisations began to follow.

As Patty says, “It's not about how we 'care for' or treat the billions of animals we mass produce to keep in line, it's about erasing the line altogether. Humans are incredible animals, but we can also be a very selfish species--we so often put ourselves first. We can and must open our minds and hearts. Promoting and/or consuming animal products deepens the rut that is grinding down our humanity, our health and the future of the planet.”

Patty welcomes the opportunity to take questions from ARZone members, which must be submitted to ARZone no later than Friday March 9 via Carolyn@ARZone.net.