***Thanks to everyone at AR Zone who replied to my inquiry into sanctuaries! This is one of many posts looking into the potential of sanctuaries. Please offer your feedback and insight***

For most folks trying to run a farmed animal sanctuary, they soon learn it is a money sink.  Not everyone is as fortunate, visionary, or aggressive in their fundraising as the founders of Farm Sanctuary.  The…

This story in the news today.

It's incredible that they kept the elephant there while there was blasting going on nearby causing the elephant to suffer panic attacks.  Yet another not surprising outcome from…

Remembering the fallen animals of war.

Today, April 25th, is Anzac Day in Australia when we celebrate the sacrifices of soldiers since WW1 to present day.  It is a date that comes from the Anzac (Australian & New Zealand Army Corps) soldiers who fell in the battle at Gallipoli.

What is usually forgotten is the role that animals, in particular horses, played in the wars.  The treatment they received however was anything but honourable.

The Australian Waler Horse is well known for stamina, courage and strength. … 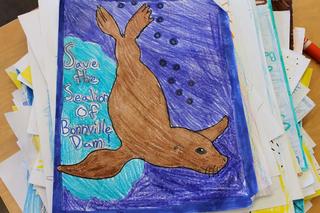 Not a day goes by when I don’t sign into my email or search the web and find the phrase “social enterprise.”  It’s increasingly common where there’s “social change.”  More and more social justice groups are adopting it.  So what is it exactly that makes folks grab hold of it not unlike the sustainability frenzy?

Social enterprise offers a way to get to the heart of human values without having to take a single philosophy course.  And an unfortunate consequence, like sustainability, is…

Before some of y'all get mad or confused, the title is not an attempt to co-opt the phrase "environmental justice" away from communities of color plagued by environmental, health, and economic inequalities.  Nor is it an attempt to replace "animal rights."  This post is concerning issues of space and habitat I've been grappling with for a while.  As I've started working directly with urban animals, urban black communities living in poverty, and this notion of interspecies community, I've had…

An overview of how the [US] campaigns for abolitionism and woman’s rights emerged together and affected each other.

flyer for the same action in French

Here is the flyer in french of this action for those wh o are interested: 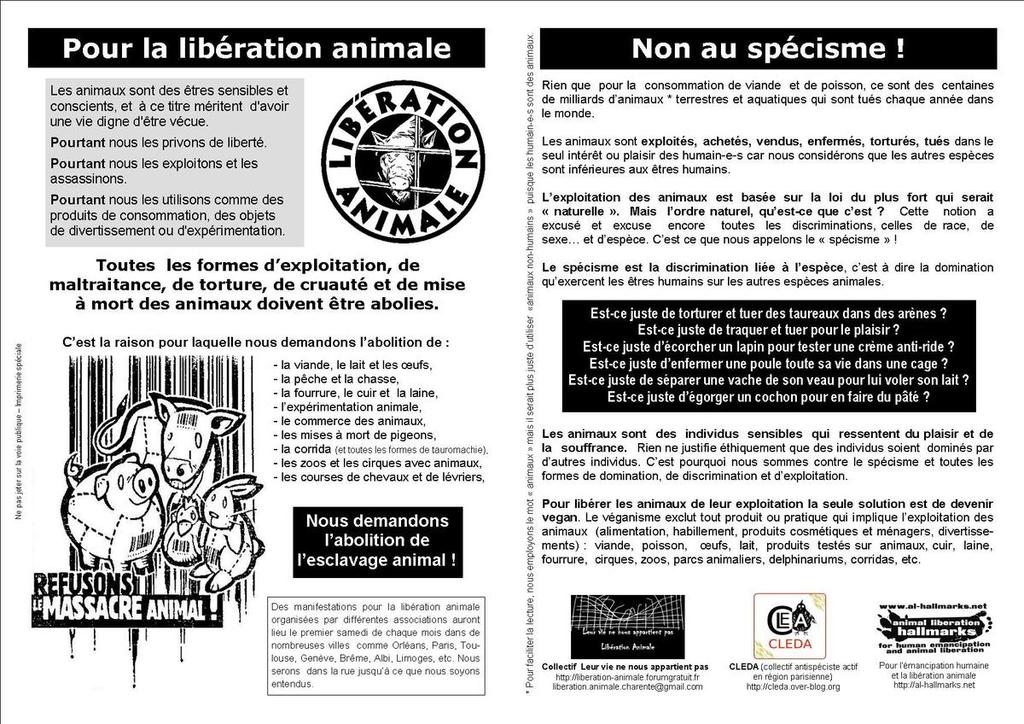 I am looking for people who would like to organise demonstrations on if possible monthly basis in Belgium where I could help and everywhere else also.

They are doing it in France  in 9 cities in Zwitzerland and Italy but we are looking to spread this event all over the world.

They ask the end of all kind of animal uses, all animal exploitation

The idea behind is clearly explained on …

How have other movements organized and where has it taken them?

Debate - Animals should be off the menu - features Peter Singer

This has a duration of 55 minutes and was a debate in Melbourne.  I'm not sure how long it will be available on the ABC website but here is the link.

DO DOGS (ANIMALS) HAVE SOULS?

"A lawsuit filed in against a New York pet store aims to change the way a pet is legally viwed..."etc.

Though the issue relates to "pet" I think it is still very interesting "to prove the existence of soul" (or spirit) for all animals,  which will only make any sense for those of us, humans that believe in souls and spiritual content in humanas...

And I am not talking about religion, any of…

I just wanted to share that the complete collection of The Beast is available at Conflict Gypsy. It features articles by and about Richard Ryder, Brigid Brophy, Peter Singer, Paul Watson, and others. It also has some amazing bits of our history, like a 1972 picture of Ronnie Lee hunt sabbing in a suit! Check it out at …

Exploitation and the “Resource” Mentality of John Wayne

In a previous blog post, I suggested that the history of animal exploitation was like a centuries-old ‘trail of tears’ in that, just as the Indian Removal Act of 1830 forcibly separated Native Americans from their homelands, so the treating of animals as mere commodities separated them from their natural lives and habitats. In the case of the Cherokee and other tribes, white Americans sought to acquire their land and the tribes were simply “in the way.” In the case…

During August of 2010, the Animal Planet channel repeatedly televised a documentary entitled “The Last Cowboy,” which narrates the lifestyle, work habits, struggles, and rewards of three Wyoming cattle ranches—those owned by the Stuckey, Hughes, and Galt families respectively.

Every year at the end of “calving” season, family members must assist in branding each new animal in the herd, which may include as many as 400 “head.” This entails roping, dragging, innoculating, and…

rape by any other name...

i read an alarming article the other day that appalled and sickened me – well, let’s face it, there are many things that appal and sicken me about human treatment of animals – but this is disturbing on so many levels, its prevalence frightening…