Activists in Hangzhou spent 4 hours on Tuesday (24th June 2014) chasing at high-speed, a truck with nearly 2000 cats on board, headed for slaughter. They managed to intercept and block the truck. From the early morning they guarded the truck, waiting for officers from animal inspection to come at 9am to inspect it.
The activists gave a shout out on Weibo, asking people to help them and to bring cat food and cages. They are exhausted and many…

64 year old Yang Yu Hua spent all her 6000 Yuan to rescue about 30 cats and 70 dogs. One of the photos (bottom left) shows her weeping as she leans on the cage, overcome with emotion at rescuing these lucky souls. Anty Yang has a shelter in Chongqing and we previously covered a rescue that she was involved with of 50+ dogs, headed for slaughter in December 2013. The dogs were taken to her shelter.
Photos sourced…

China:~Our Chinese Activist, Du Yufeng, Stands Up To Bullies Who Try To Disrupt Her Protest At Yulin

This is the 3rd year in a row that our Chinese Activist, Du Yufeng, has travelled nearly 1000 miles from her home in Guangyuan, Sichuan to Yulin, Guangxi to join other activists at the Dog Meat Festival. She and her group protested in front of Yulin Government Offices this morning (June 21st) at around 11:00am despite being hassled by local men! The moment they started handing out leaflets and banners, local men ran to…

China:~ACTIVIST YANG TRIED TO SAVE GOLDEN RETRIEVER FROM SLAUGHTER IN YULIN - SHE FAILED....

Yang Xiao Yun, founder of Common Home for All Stray Animal Rescue Centre in Tianjin was mocked and intimidated by the locals when she tried to save a Golden Retriever from slaughter after she stopped a young man who claimed to be the dog's owner, Yang dropped to her knees and broke down tears, begging the young man to let her keep the dog but her pleas fell on deaf ears. The man would not let the dog go with her. Yang’s…

China:~DOG TRAFFICKERS IN YULIN, BLACKMAILING ACTIVISTS TO SAVE DOGS FROM SLAUGHTER!

This morning, 20th June, on the eve of the Dog Meat Festival, a dog trafficker, having seen an animal activist at the scene, deliberately tortured this dog to blackmail her by saying "Are you going to buy him, if not I will clamp him to death". The dog trafficker asked for 600 Yuan (US$96) but the activist, Zhao Jie bartered and paid 350 Yuan (US$56) for the dog. The trafficker waved the money to the crowd with delight and…

China:~UPDATE ON DOGS RESCUED FROM YULIN

Survivals of the aftermath. Chinese activists have rescued approx 200 dogs from Yulin. The dogs have now been taken to a safe place in Shangrao, 1680km away from Yulin. A lot of the dogs rescued have eye discharge and pus coming from their noses and have tested positive for canine distemper. Dog meat restaurants claim they don’t kill pedigree dogs so where did the Tibetan Mastiff and Samoyed come from? This reinforces…

Chinese activists have rescued approx 200 dogs from Yulin. The dogs have now arrived in Shangrao, Jiangxi, 1680km away from Yulin. Local vets are there to help with medical treatment. Some of the dogs were pregnant and gave birth to puppies on the way to Shangrao. Activists have posted on Weibo asking for donations of dog food to feed these hungry mouths. …

Do you remember the story of the 2 legged dog in China raising her puppies? At the end of a long rescue Jill Robinson of Animals Asia told us that she was going to adopt Si Bao (meaning Four Treasures) and her puppies. 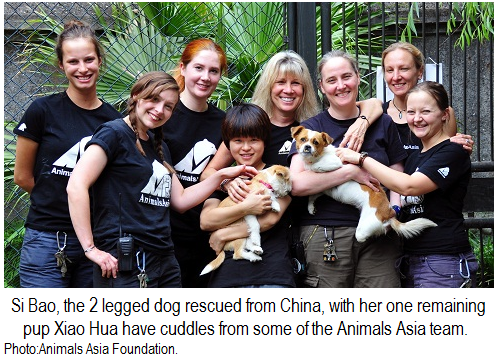 Now, Si Bao and her one remaining pup Xiao…

India:~SUNDER THE ELEPHANT IS ON HIS WAY TO SANCTUARY!! VICTORY!!

THIS IS THE NEWS WE HAVE ALL BEEN WAITING FOR!! SUNDER IS ON HIS WAY TO FREEDOM!!
Days after the Supreme Court upheld the Bombay High Court order, Sunder is finally on his way to freedom having boarded the truck to a rescue and rehabilitation centre at Bangalore under mild sedation this morning (Thursday 5th June 2014).
The Supreme Court had, on May 29, upheld the Bombay High Court’s judgement ordering Sunder’s release by…

Do you remember a few months ago, there was a story about a 9 year old boy in the Philippines whose father followed him one day and discovered that he was feeding the stray cats and dogs?

The story went viral and as a result donations started flooding in to help the young boy, Ken, and his animals. Ken did his best to help the animals and frequently spent time with them and offered them food, but he longed for the funds to…

The Yulin Dog Meat Festival. The sentence that brings anger and upset to us all. Next month on the 21st of June the cruelty will start again. Thousands of dogs will be tortured to death, destined for someone's plate. The cries, whimpers, screams and smell made our Chinese activist Du Yufeng and her volunteers cry with helplessness when they protested at the festival last year and previous years. Chinese activists and ordinary animal lovers have been taking to the…

The definition of ‘veganism’ from The Vegan Society U.K. is as follows -

“The word “veganism” denotes a philosophy and way of living which seeks to exclude — as far as is possible and practical — all forms of exploitation of, and cruelty to, animals for food, clothing or any other purpose; and by extension, promotes the development and use of animal-free alternatives for the benefit of humans, animals and the environment. In dietary terms it denotes the practice of dispensing with all…

"Mother of dogs" rises from the fire.

Read this extraordinary story of a remarkable, brave woman who now dedicates her life to animals:

Inside an ordinary rental house in Zhengzhou, lives a special family, one human, four dogs and a cat. Although they are of different species, all of them have had the same rough experience in life. This helps to bond them together.

Chu Hui is the “mother” of…

Led by respected Municipal Secretary Zhou, Government officers from the city, district and village spent a cold winter visiting Guangyuan Bo Ai Animal Protection Center to inspect the progress of the construction for the new shelter. They gave many constructive proposals and offered much needed help by installing running water and power! We and Bo Ai are deeply grateful for the support and help from all levels of the Government. The building work can start to begin…

China:~Help Us Get Justice For Dog Beaten To Death By Police In Langzhong, Sichuan.

On 4th March 2014, police in Langzhong City, Sichuan, China, brutally killed a pet dog belonging to a homeless man. The killing was for no reason at all and is totally unacceptable. The dog was still chained when the police forcefully removed it from it's owner who could do nothing but watch while his companion was beaten to death with…

A Japanese convenience store chain has cancelled the launch of its foie gras lunchbox after customer complaints about animal welfare, a company spokesman said Thursday. 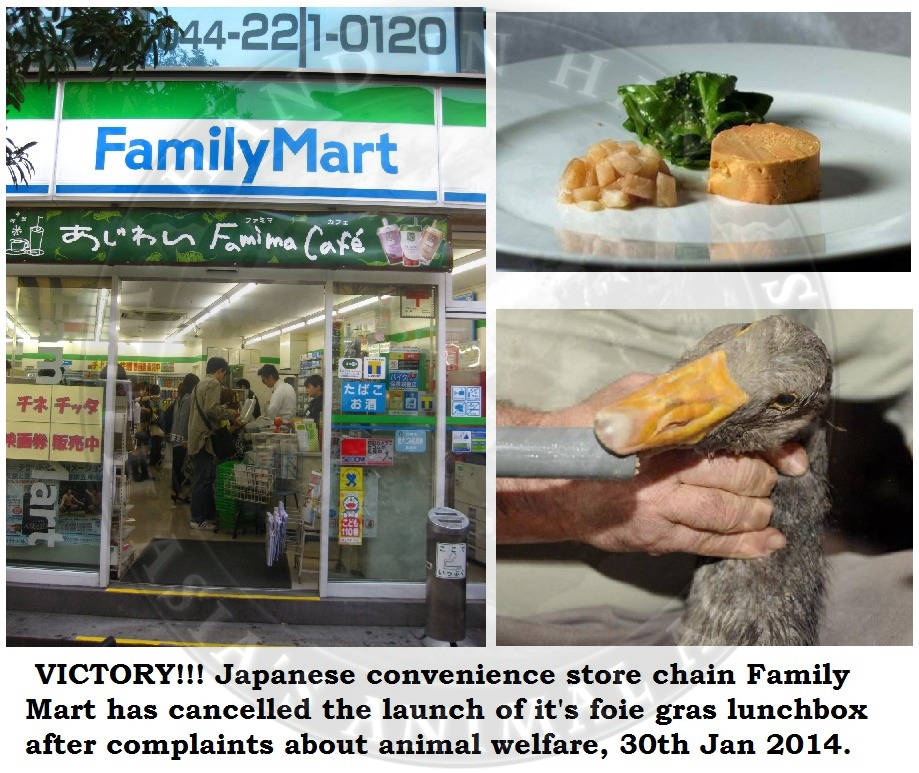 FamilyMart had intended to begin selling the lunchbox…

Activists protesting against Japan’s indigenous dolphin hunting held a rally in Tokyo Friday, calling on officials to stop sales of the marine mammals to aquariums and as meat.

Activists protesting against Japan’s indigenous dolphin hunting held a rally in Tokyo Friday, calling on officials to stop sales of the marine mammals to aquariums and as meat.…

China:~How China's Version Of Twitter, Weibo, Changed One Man's Life & Made Him Become A Shelter Volunteer

Zhang Xiaoqiu still remembers the date - 15 April 2011. It was when Weibo (China’s version of Twitter) changed his life, and he helped to saved the lives of several hundred dogs. The Beijing-based businessman, originally from southern China, had always been an animal lover, but the news he heard via Weibo that day led him to take action.
Fellow internet users had spotted a truck on the motorway heading…